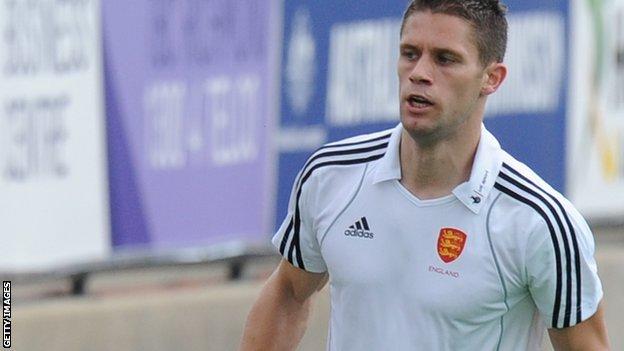 England's men claimed a 5-0 victory over Japan to reach the World League semi-finals and also secure a place at the 2014 Hockey World Cup.

It was another good performance for this group and I thought we played with flare, tenacity and solidity

England will face Argentina in their semi-final on Saturday at 12:15 BST.

By finishing at least fourth, they qualify for the World Cup as they are ranked higher than New Zealand, who were fourth in the other qualifier.

Head coach Bobby Crutchley said: "There were always going to be mountains to climb during this four-year cycle towards the Olympics.

"This might not be the biggest, but it was vitally important for us to take that first step and qualify for the World Cup next year.

"It was another good performance for this group and I thought we played with flare, tenacity and solidity."

England, who beat hosts Malaysia 2-1 in Johor Bahru to reach the quarter-finals, started well, with Gleghorne driving the ball past Japan goalkeeper Katsuyi Takase to put them ahead after 20 minutes.

Middleton flicked the ball over Takase to double England's lead before Martin added the third after the break.

A reverse-stick strike from Mantell made it 4-0 and Fox netted the fifth to seal the victory.