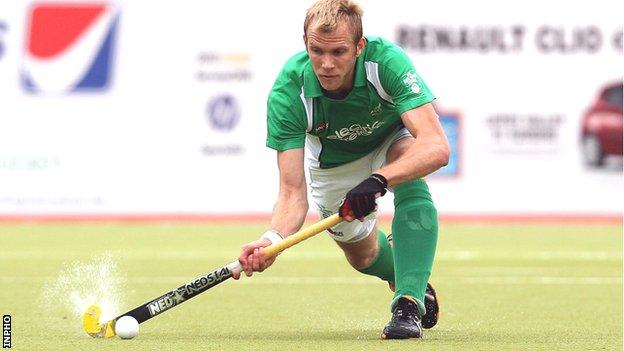 Ireland kept their hopes of making the European Championships semi-finals alive with a 4-2 victory over Poland.

Conor Harte's short corner finish put the Irish ahead in Belgium and Adam Chwalisz levelled before Shane O'Donoghue's reverse shot made it 2-1.

Eugene Magee added the third in the second half and Michael Watt hammered in before Chivalisz's late consolation.

Ireland, who were beaten 2-1 by the Netherlands in their opener, play England in Wednesday's final pool game.

There is a semi-final place at stake, as on Monday England lost 2-1 to the Netherlands who had already beaten Ireland in the opening game.

Against Poland, Harte netted Ireland's opener from a well-worked short corner on six minutes but Chwalisz equalised 20 minutes later when his shot evaded the grasp of keeper Davy Harte.

Poland failed to convert a series of short corners although Harte was outstanding and made a number of fine saves.

Kyle Good hit the side-netting while Chris Cargo clipped the post from a tight angle early in the second half.

Magee fired into the roof of the net to make it 3-1 on 44 minutes and Watt sealed the win by blasting home with six minute left.

Chwalisz netted from a mishit shot to complete his double in the last minute.

"You could certainly see that Sunday's excellent performance against the Dutch came with a cost, and with only a 16-hour turnaround I am very happy to get the result," said Ireland coach Andrew Meredith.

"We had phases where we had the opportunity to finish the game off, but full credit to the Polish on pushing us the whole game.

"We targeted this game prior to the tournament to get a result and we have met that challenge, and it is perhaps a sign of the group's development that we can still achieve important results playing below our capabilities."

Ireland will be aiming for a first semi-final appearance in the European Championships when they take on England in Boom, with the decisive Pool B encounter having a 10:30 BST start.