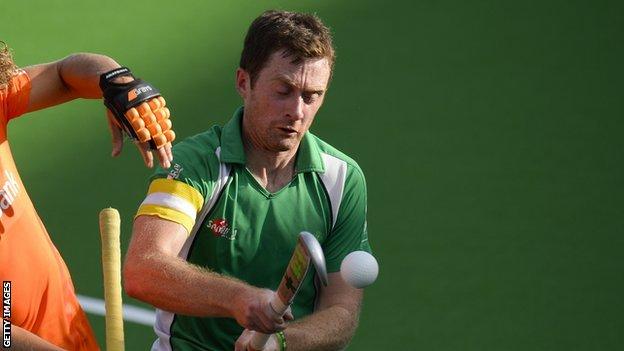 Ireland men's captain John Jackson led his side's escape from relegation to European hockey's second tier as they drew 3-3 with the Czech Republic.

Jackson's late equaliser in Belgium spared his team a defeat which would have seen them suffer the same fate as the country's women a day earlier.

"This tournament is done and there'll be a party tonight for sure. I get married on Saturday and start a new job on Thursday, so it's a bit hectic."

"We got the result we deserved and needed.

"We've been in positions like that before and that maybe helped in this game, where we had to dig deep and persevere."

Ireland were denied a semi-final place following a draw with England earlier in the tournament.

But despite needing just a point to stay up against a Czech team they beat 9-0 and 7-2 in their last two meetings, they started in the worst possible fashion.

A Lukas Plochy shot diverted in off Bruce McCandless to put Ireland 1-0 down and Stepan Bernatek's excellent goal doubled the unlikely Czech advantage within 10 minutes of kick-off.

Harte's well-struck penalty corner gave Ireland hope midway through the first half but Czech goalkeeper Filip Neusser denied a string of other opportunities.

Loughrey's desperate tip-in from a dangling stick kept Ireland within a goal of safety after Ondrej Vudmaska's stunning strike, and Jackson's penalty corner earned the point necessary to lift Ireland above Poland and avoid finishing in the bottom two.

The result gave Jackson a boost at one of the busiest times in his life.

"This tournament is done and there'll be a party tonight for sure. I get married on Saturday and start a new job on Thursday, so it's a bit hectic," he added.

"Putting up the marquee will be a lot easier with that weight off my shoulders."