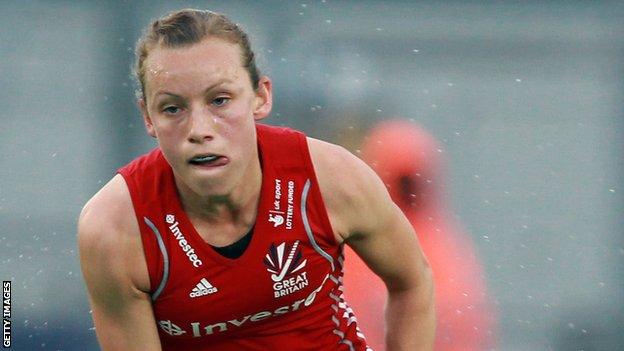 Olympic bronze medallist Chloe Rogers is seeking a return to international hockey after a year away from the game.

The 28-year-old was part of and has a combined total of 162 caps for Team GB and England.

"I'm trying to get back into the international set-up. It's proving quite tricky and will be a long path."

Chloe Rogers has appeared at two Olympic Games, two World Cups and two Commonwealth Games and has at least one bronze medal from each competition

Former Leicester midfielder Rogers, from Great Dunmow, stepped away from hockey following the Olympics and only returned this September with Chigwell-based Old Loughtonians.

"I was at the peak of my career in one of the best tournaments you're ever going to play in," she said.

"My body and mind just needed a break. I wanted to develop other things, maybe what I'm going to do after sport."

Twelve months out of the spotlight have seen her slip down the pecking order, but she is hoping she can force her way back into contention for a place in England's squad for next year's Commonwealth Games in Glasgow..

"Whether the Commonwealths is going to happen too soon for me, I don't know. I'm certainly going to try and give it a go and see what happens," she said.

"I'll take it little steps at a time. The first step is trying to get back into the training squad and then it's about trying to establish a place within the tournament 16."