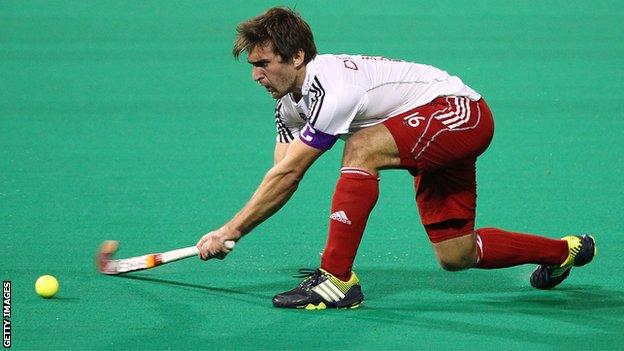 England opened their World League Final campaign with a 2-0 win against hosts India in Delhi.

Adam Dixon scored once in each half, both goals coming from penalty corners.

It is England's first competitive tournament since they lost the play-off match for bronze against the Netherlands at EuroHockey 2013 in August.

In the other Pool A match, reigning Olympic and European champions Germany thrashed New Zealand 6-1.

Dixon said after England's victory: "I don't score many goals and was just in the right place at the right time.

"It's crucial to start with a win as you set the momentum for the rest of the tournament."

Australia beat Belgium 3-2 in the opening match of Pool B, while Argentina overcame the Netherlands 5-2.

England, currently ranked fourth in the world, finished third in the World League semi-finals last year, meaning they qualified for the World Cup, which starts in May in the Netherlands.

After a tight and tense start to the match in which forward Simon Mantell hit a post, England finally broke the deadlock in the 28th minute.

Dixon finished off a well-worked penalty corner with a shot which found the right-hand side of the net.

And he got his second early in the second half following another England penalty corner, pouncing from close range after a scramble.

India thought they had scored through Rupinder Singh in the 58th minute, but the goal was disallowed after a successful referral from England who noticed that the ball had not left the circle at a penalty corner.

Ashley Jackson nearly made it three for England late in the match when he forced a great save from India goalkeeper Sreejesh Parattu Raveendran.

England's next game is against Germany on Saturday before they complete their pool fixtures against New Zealand on Monday.