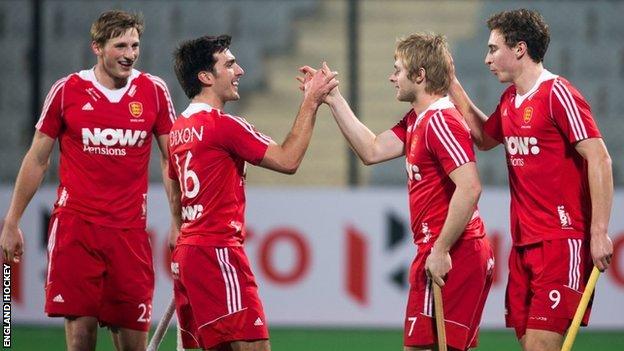 England beat Olympic and European champions Germany 2-1 to go top of Pool A at the Hockey World League Final.

Reading's Tom Carson turned neatly to fire in the opener but Marco Miltkau levelled after a goalmouth scramble.

Ashley Jackson restored the lead before half-time with a trademark drag-flick as England followed up Friday's opening victory over hosts India.

"We defended well and we looked a consistent threat on the counter-attack," said coach Bobby Crutchley.

Germany continued to push in the second half but George Pinner stood firm in England's goal and the defence held out to wrap up the victory.

England play New Zealand in their final pool match on Monday and Crutchley knows where his team needs to improve if they are to continue their unbeaten run in the competition.

"We kept getting our shape wrong at times, but that's only because we lack a bit of match practice and I know that will improve as the tournament goes on," he continued.

"I'd like us to retain the ball under pressure and push forward more. I know the team is capable of sustaining longer periods of attacking play and it's a case of us looking to get a little bit better every game."

England's game against New Zealand begins at 08:30 GMT on Monday.