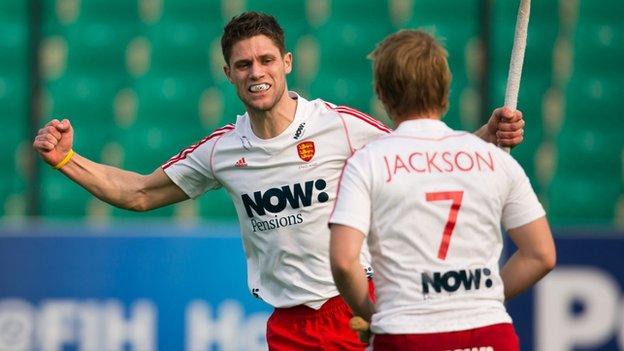 A brace from Ashley Jackson was quickly followed by strikes from Tom Carson, Mark Gleghorne and Barry Middleton.

England will now face the team that finishes bottom of Pool B in the quarter-finals on Wednesday.

Ranking points gained at the World League count towards placings at June's World Championships in the Netherlands.

What is Hockey World League Final?

The first opening at Major Dhyan Chand National Stadium in Delhi fell to New Zealand, ranked seventh in the world, but neither Hugo Inglis nor Jacob Smith could profit from a goalmouth scramble.

And Jackson soon punished the Black Sticks, crashing home two drives from the head of the D either side of the interval.

Gleghorne then converted an almost identical effort for his first goal of the tournament, before Inglis pulled one back for New Zealand, forcing home after George Pinner saved.

But England restored their three-goal lead when Carson converted after a mazy Jackson dribble before captain Middleton completed the rout with less than a minute remaining.

England will face the Netherlands or Belgium in the quarter-finals, with the two sides at the bottom of Group B playing each other later on Monday following Australia v Argentina in the same group.

Then the focus shifts back to Group A and the battle to finish second, with world number one side Germany facing the hosts India.