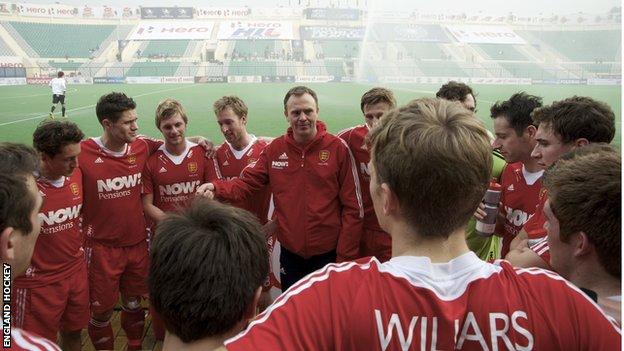 A second-half strike from Tom Carson gave England victory in a closely fought game in Delhi.

Carson also had a first-half goal disallowed as England maintained their 100% record in the competition.

England will now face New Zealand, who beat Argentina 4-3 in a shootout after their quarter-final finished 1-1 at full time.

Friday's other semi-final will be between the Netherlands, 2-1 conquerors of Olympic and European champions Germany, and Australia who thrashed hosts India 7-2.

England, who are currently ranked fourth in the world, had topped Pool A while fifth-seeded Belgium finished bottom of Pool B.

The last time the two teams faced each other was in the Euro Hockey semi-finals in August, with Belgium winning 3-0.

But this time it was the English who came out on top and they thought they had gone in front early on when Carson volleyed past Jeremy Gucassof.

However, Belgium used a video referral to query the goal and it was disallowed after the replay showed the ball had struck Simon Mantell's arm before he passed to Carson.

The 23-year-old finally broke the deadlock early in the second half with a strike from the edge of the circle following a penalty corner.

Belgium continued to press, but a string of fine saves from England goalkeeper and Hero Man of the Match George Pinner helped England keep a clean sheet.

"It's nice to play my part today," said Pinner. "It's a hard-fought game at 1-0 and you know you can't make any errors."

England will face New Zealand in Friday's semi-final, a side they beat 5-1 in Monday's Pool A game, and Pinner believes his team stand a chance.

"You come to a top-eight tournament like this and there are no easy games. We've won four from four and our confidence is high so we'll take whoever we get," he said.