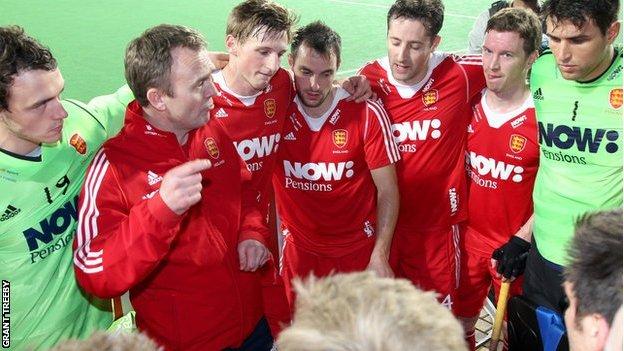 England's men were beaten by New Zealand in a thrilling sudden-death shootout at the Hockey World League semi-final in Delhi.

Goals from Harry Martin, Mark Gleghorne and Ashley Jackson helped England come from behind twice as the game finished 3-3 at full-time.

With the initial shootout also level at 3-3, it went to sudden death.

But after Martin missed for England, Phil Burrows netted for the Black Sticks as New Zealand triumphed 7-6.

England, who are currently ranked fourth in the world, beat Belgium 1-0 in the quarter final on Wednesday, while seventh-seeded New Zealand had beaten Argentina 4-3 after another sudden-death shootout.

Prior to the semi-final, Bobby Crutchley's England side had only conceded two goals and maintained a 100% unbeaten record in the competition.

The two sides had recently faced each other in Monday's Pool A match when England thrashed New Zealand 5-1.

The Kiwis took an early lead in the 12th minute when Marcus Child was left unmarked in the circle and scored with a shot across goal through the pads of keeper George Pinner.

England equalised against the run of play in the 23rd minute when Gleghorne made a run down the touchline and crossed for Martin who dived at full stretch to tap in.

The second half began at a high tempo, as the first half had ended, and England soon took the lead through a Gleghorne strike across the face of goal.

The Black Sticks then bounced back with two goals in as many minutes from Stephen Jenness and Hugo Inglis to go 3-2 up.

Barry Middleton then earned England a penalty when he was fouled in the circle, and Ashley Jackson equalised with a confident stroke into the bottom left corner.

Both New Zealand and England missed their first penalties, with Hugo Ingles and Nick Catley respectively hitting into the the side netting.

The sides remained level throughout, until Martin missed England's final shot which allowed man of the match Burrows to win the game for New Zealand, when he confidently beat Pinner.

"We played disappointing first time against England," said Burrows. "But we're a young team growing in confidence getting better and better every game."

England will now contest the bronze medal against Australia who were beaten 4-3 by the Netherlands, who will meet New Zealand in the final.