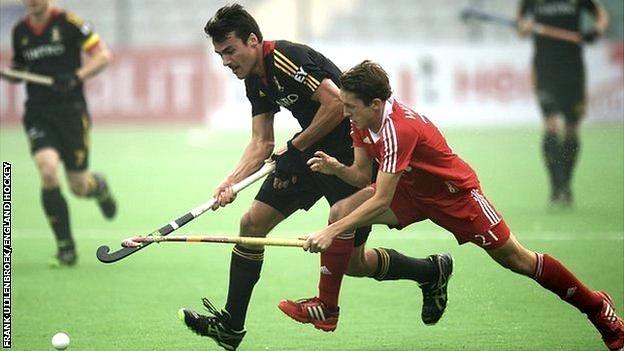 Coach Bobby Crutchley says Tim Whiteman has added an air of invincibility to the England squad for their Four Nations tournament in Glasgow.

Whiteman, 27, is yet to suffer a senior international loss in nine matches.

The remarkable run includes collecting bronze at the World League Finals in his debut tournament in January.

"Our set of results since he has been playing is outstanding - he is our lucky mascot," said Crutchley ahead of Friday's opener against Argentina.

Talking to BBC Sport, Crutchley continued: "A number of us play for years and never get nine results like that.

"He also certainly brings quality to us. I always knew he was an outstanding hockey player."

And it very nearly never was for Whiteman, who took a year away from the sport as he struggled to overcome a groin injury which plagued him while playing for Crutchley's England Under-21 squad.

He retired for nearly a year, instead choosing to travel and teach in places like India and the Philippines.

The lure to play again, however, proved strong and he returned to action with Beeston, helping the Nottinghamshire club win back-to-back English championship titles and most recently reach the last 16 in the Euro Hockey League where they were narrowly beaten by Belgian side Waterloo Ducks.

It was even part of his work life as a history and politics teacher, taking on a coaching role at Repton School in Derbyshire where he worked alongside former international and Beeston Bees player-coach Martin Jones.

Still, Whiteman considered hockey a "hobby", readily admitting that hopes of winning full international honours were beyond him.

Being surrounded by a host of England and Great Britain players at Beeston, including Adam Dixon, Ollie Willars, George Pinner and Harry Martin, soon convinced him to try join England Hockey's centralised programme.

"I really didn't think I had a chance, and didn't think it would be the next part of my life as I focused on teaching," said Whiteman, who has won seven England and two Great Britain caps since January.

"But this is what I wanted to do since I was six or seven years old.

"I was feeling good after three years playing, but not as good as I feel now - Bobby took a punt on me with my injury history."

It is a gamble that Crutchley is happy he made.

"I'm delighted for him that he had the opportunity, but for us because he is high-quality hockey player," he said.