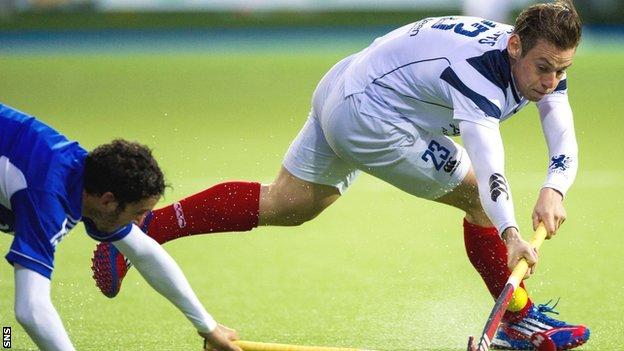 Old rivals England and Scotland meet on Saturday afternoon in Glasgow still looking for their first victory in the Four Nations tournament.

Hosts Scotland were edged out 4-3 by Belgium in their opener on Friday, while England were held to a 2-2 draw by Argentina.

Scotland are preparing for hosting the Commonwealth Games at the venue.

The hosts are ranked 22nd in the world, while their three opponents are warming up for next month's Hockey World Cup in the Netherlands, with England fourth, Belgium fifth and Argentina 12th in the rankings.

Wimbledon forward Alistair Brogdon gave England the lead over Argentina after only three minutes, but Manuel Brunet fired the equaliser after 21 minutes.

East Grinstead's Mark Gleghorne restored England's advantage through a 47th-minute penalty corner, but the lead only lasted seven minutes this time as the Argentines secured a point through Agustin Mazzilli's superb individual goal.

England head coach Bobby Crutchley said: "We made too many errors across the whole game, but there were plenty of good signs that came from our performance."

Scotland took the lead against Belgium through striker Kenny Bain after seven minutes.

However, the lead lasted only 13 minutes as two goals in two minutes from Tanguy Cosyns' reverse stick deflection and Tom Boon, making his 150th appearance, put the Belgians in front.

Scotland could not find an equaliser, but captain Grassick considered it a "great comeback".

"We really believed in ourselves a bit more and we were really delighted to have got back into the game," he said.

Head coach Derek Forsyth thought it was "another step forward against the world number five".

"We played them a year ago and lost 7-1, and they're five weeks away from a World Cup and on a full-time programme, so we're happy with the performance.

"If we can keep improving in the build-up to the Commonwealth Games then we have a chance.

"It will be tough against England after a quick turnaround. There will be a big crowd here and we're looking forward to it."

Forsyth assembled his squad in the Netherlands last week to give the players, who play for club sides around Europe, time to work together.

Gavin Byers, who left Grove Menzieshill for Sheffield this year to experience a higher standard of hockey, said: "It was the first time we've been together as a squad for three months.

"We see each other a lot over the summer. But, after that, we can go months without seeing one another, so it can be difficult for the rhythm of the team."

There are 24 players are in the current squad, but Forsyth must cut this to around 18 players by 5 June, when the final squad for Glasgow 2014 is announced.

Before then, there are games against Wales in a fortnight and a lengthy training period before the Commonwealth Games squad compete in the Investec Cup in London in the weeks preceding Glasgow 2014.