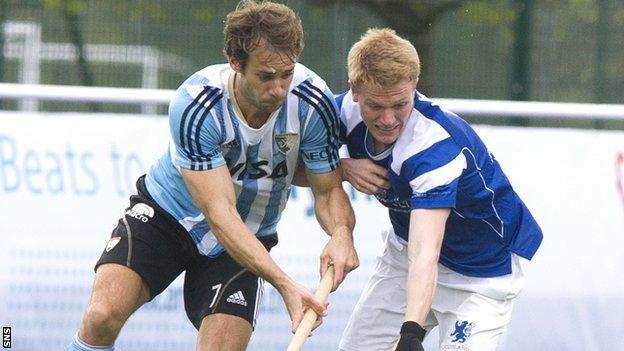 Belgium and Argentina will contest Tuesday's play-off to determine the winner of the men's Four Nations hockey tournament in Glasgow.

The Belgians made it three wins on the trot with a 2-1 triumph over England, Cedric Charlier scoring the decisive goal at the National Hockey Centre.

This followed Argentina's 5-2 victory over the host nation on Monday morning.

The South Americans' goal difference was one better than England's so they progress to the top-two play-off.

England beat Scotland 3-1 on Saturday and the nations will compete again at 11:00 BST on Tuesday, at an event which is a Commonwealth Games warm-up for the Scots and World Cup preparation for the three visiting countries.

Belgium, ranked fifth in the world, took the lead on the stroke of half-time through their captain Felix Denayer and Phil Roper levelled for England on the hour mark. However, Charlier got the winner six minutes from time against Bobby Crutchley's men to set up the match against Argentina.

The Scots had lost 4-3 to Belgium on Friday before their defeat by England.

East Grinstead's Niall Stott was presented with a commemorative quaich prior to the match against 10th-ranked Argentina to mark his 150th Scotland cap.

Western Wildcats goalkeeper Gavin Somerville was called into action in the ninth minute with two sharp saves to his right to deny Juan Agulleiro and Lucas Vila.

Scotland's first chance came in the 17th minute when Chris Grassick's clever lofted pass down the right was laid off for Kenny Bain whose strike was parried by Juan Vivaldi in the Argentina goal.

A momentary lapse in concentration set Vila racing in on Sommerville but none of his team-mates had kept pace to knock in his pass across goal.

Sommerville made another brace of saves as the half-hour mark approached, diverting Gonzalo Peillat's shot wide with his foot then using a leg to clear again in the following move.

Scotland took the lead through Bain's low slam from a short corner but that was cancelled out before the interval when the muscular Peillat struck high into the net.

Having held their own, Scotland coach Derek Forsyth was visibly frustrated when the visitors nabbed another in the final seconds of the first half, Facundo Callioni shooting home from close range.

If that was unfortunate, Forsyth would have been less forgiving when Argentina's number 10 Matias Paredes found space in the D to thunder a third goal for Carlos Retegui's side just after the interval.

Scotland had the upper hand for the next quarter of a hour without making the opponents' goalkeeper work. Ian Scholefield weaved his way down the left and crossed for Nicky Parkes six yards from goal but the Argentine marking was sufficient to limit his effort to a mere glance across the face of the goal.

Peillat rattled in from a penalty corner drag-flick to make it 4-1 and Dan Coultas arrowed Scotland's second from the same set piece at the other end.

But Argentina hit back straight away as captain Lucas Rey's lofted pass found Callioni who finished expertly and, while Coultas and Bain went close in the closing minutes, Scotland could not find a way past Vivaldi a third time.