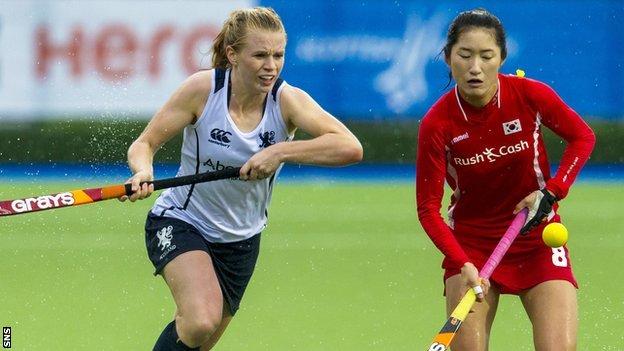 Scotland lost 3-2 to South Korea in their Champions Challenge classification match on Saturday.

Gordon Shepherd's side had lost 2-1 to South Africa in the quarter-finals on Thursday, resigning them to the play-offs for fifth to eighth place.

They dominated South Korea for spells and were tied at 1-1 at half-time.

But second-half goals in quick succession by Miyun Park and Jin Hye Cho left the Scots chasing the game, with Catriona Ralph pulling one back.

The girls are not letting themselves or the country down. I am extremely proud of what they put out there

Scotland were trailing within a minute. Goalkeeper Amy Gibson made a good save from Park but the umpire awarded a penalty corner for an illegal foot inside the circle following which Seul Cheon opened the scoring with a drag-flick low to the right corner.

However, the hosts fought back and five minutes later were level when Ailsa Wyllie beat Korean goalkeeper Soo Ji Jang with a clinical strike after skilful build-up play by Sarah Robertson.

Both defences withstood the probing of their opponents until the 24th minute when Gibson denied Eun Bi Cheon and Miyun Park, before Ali Bell's swivel and shot brought the best out of Jang at the other end.

Gibson made another impressive brace of saves on the stroke of half-time from Sil Young Lee and Seul Cheon, before Wyllie forced Jang to parry the ball to safety.

Emily Maguire, Ralph and Morag McLellan then combined to set up Scotland captain Linda Clement, who chipped a tooth during the match, but she shot over the bar.

Against the run of play, Miyun Park evaded Gibson's dive to flick home in the 50th minute, and soon after Darae Kim drew Gibson out of her goal and slipped the ball to Cho to make it 3-1.

Ralph's fizzing shot past Jang following a penalty corner gave Scotland hope of finding an equaliser, but South Korea ran down the clock to progress to the 5th/6th play-off against India.

Ralph, making her 150th international appearance, told BBC Scotland: "We are proud of what we did, but we just didn't come up with the result.

"We really believed we could get to the final. We had a slip-up against South Africa but we feel that we have built on every performance and tomorrow is another chance to take it forward."

Scotland will play India on Sunday after their 4-2 play-off defeat by Belgium.

Shepherd was "delighted" with aspects of his side's performance against a team ranked seventh in the world, particularly their effort.

"With a team ranked as highly as they are, they've got players who, when given one chance, take it," said the Dundonian.

"The girls are not letting themselves or the country down. I am extremely proud of what they put out there. In all five of our games they have applied themselves and we have one more to go.

"There's plenty to be positive about. Every team in this competition is ranked higher than us. It's a platform we can certainly build on for the summer."