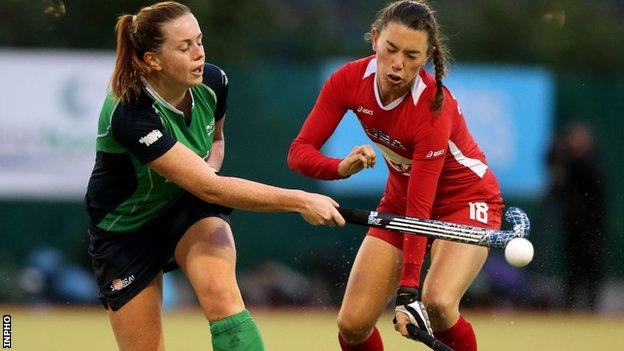 Ireland women's team suffered a 3-1 defeat by the United States in the Champions Challenge final in Glasgow.

Emma Smyth put Ireland ahead ahead after three minutes in Sunday's decider but Paige Selenski levelled before Caroline Nichols made it 2-1.

Katie O'Donnell added the third as Ireland had to settle for silver.

Meanwhile, Paul Gleghorne and Chris Cargo scored for Ireland in the 4-2 defeat by hosts Malaysia in the men's Champions Challenge bronze medal game.

Ahmad Nasrudden netted from a penalty stroke before Muhammad Baharom made it 2-0 after 11 minutes.

Ireland hit back, first when Gleghorne deflected in from open play and then Cargo levelled early in the second half.

Malaysia struck twice in the final six minutes, through Aslan Misron and Firhan Ashari, to secure victory and the bronze medal while Ireland finished fourth.

"I am happy about the positive way we played, creating enough chances in the 70 minutes to get a result," said Ireland men's coach Ned Fulton.

"I am proud of the team and the improvements they have made against the tough opposition throughout this tournament."

The Irish women's side progressed to the decider despite being ranked seventh in the tournament.

Ireland made the perfect start from an unconventional corner routine - captain Megan Frazer with the raised shot which was batted down and in by striker Smyth.

Selenski slammed home from close range to equalise and the USA took the lead in the 33rd minute with Nichols netting from a set-piece corner.

Ireland squandered chances before O'Donnell made it 3-1 on the second phase of a penalty corner after 48 minutes.