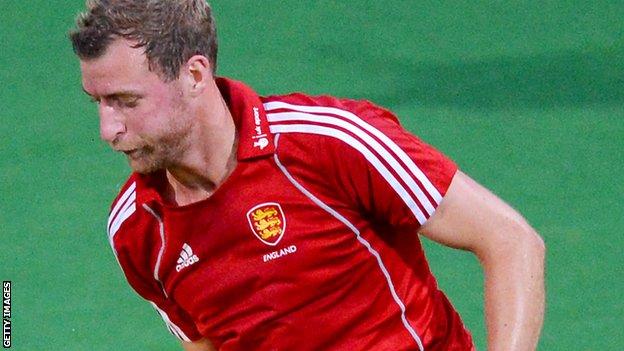 England's men and women both failed again to win at the Four Nations Tournament in Germany, as their World Cup build-up continued.

The men fought back from two goals down to salvage a 2-2 draw with Germany in Dusseldorf.

But the women were soundly beaten 3-1 by the hosts in Bremen.

We were not up to our usual standards technically

Both suffered blows to their plans for the World Cup, which starts in the Netherlands at the end of May, when they lost opening games on Thursday,

The men looked to be heading to another defeat in the invitational tournament on Saturday until goals from Ashley Jackson and Dan Shingles pegged back the Germans.

"I was disappointed that we failed to impose our game," said head coach Bobby Crutchley.

"The squad must realise we must make things happen in the game rather than reacting to the opposition."

The women snatched the lead in Bremen through Alex Danson, but then collapsed as the home side dominated the second period.

"We were not up to our usual standards technically," said women's head coach Jason Lee.

"We missed passing and receive opportunities and we missed tackles. This meant extra running in the game, which caught up with us in the second half."

Both sides play again on Sunday, with the men facing Belgium while the women test themselves against Japan.