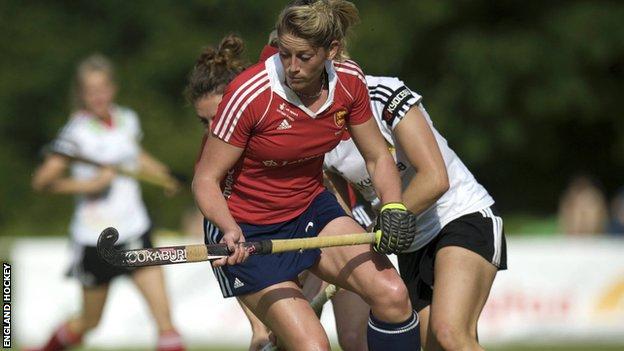 Alex Danson and Lily Owsely scored in each half to earn a 2-0 win.

England's men were defeated 3-2 by Belgium as they continued their poor form ahead of the World Cup, to be played in the Netherlands from 31 May.

Goals from Iain Lewers and Ashley Jackson were not enough to salvage a draw as Belgium held on for victory in their final match in Germany.

England's women had failed to win in their previous two fixtures in Dusseldorf, losing 4-2 to Australia and 3-1 to Germany.

"This was a much better technical performance", said head coach Jason Lee. "There was much more fight and endeavour in the group, and it's a good performance to take forward."

England's men end their participation at the competition with one draw and two defeats, having followed an opening day 3-1 loss to the Netherlands with a 2-2 draw against Germany.

"It was a game of contrast with plenty of good signs but also some disappointment," said head coach Bobby Crutchley. "We didn't utilise good circle possession to create clear goal scoring opportunities and our reactions were slow in front of goal."