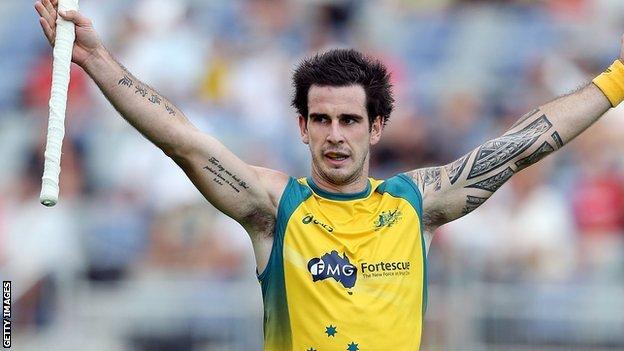 England fell to their second World cup warm-up defeat by Australia in as many days as the visitors recovered from 1-0 down to win 3-1 at Bisham Abbey.

Phil Roper, who scored England's only goal in a 2-1 defeat on Saturday, saw his 27th-minute strike negated by two goals from Kieran Govers.

Australia, the world's top-ranked side, rounded off victory as Chris Ciriello shot in from a penalty corner.

The World Cup starts in the Netherlands at the end of May.

England's first match in The Hague is against Spain on 31 May before meetings with Australia again, Belgium, India and Malaysia in Pool A. The top two teams from the group will reach the semi-finals.

"Over the two games I've been generally happy with what we have produced, however the last half of hockey was disappointing," said head coach Bobby Crutchley.

"We didn't put enough pressure on Australia and when you allow them to dictate the game it's always going to be an uphill battle."