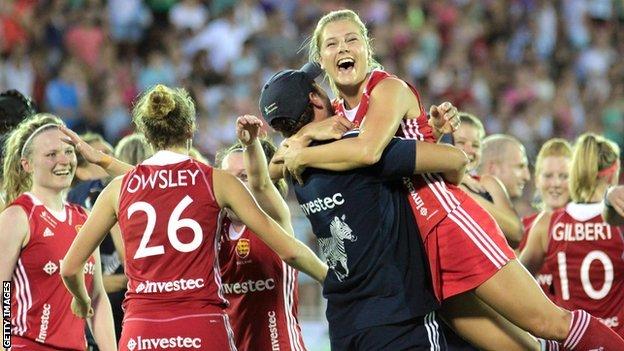 England women can spring a surprise and win the Hockey World Cup, according to head coach Jason Lee.

"There are six countries that think they might have a chance of winning it and we're in that group for sure," Lee told BBC Sport.

Lee's side begin their campaign against the United States on Sunday, while England's men play Spain on Saturday.

The 17-day tournament in The Hague, Netherlands, is the biggest event in the sport since the London Olympics.

It is the first time in 16 years that the men's and women's events have been held in the same city.

England's women are hoping to continue the progress which has seen them rise from fourth to third in the world rankings over the last year.

"We've beaten both Argentina and Holland in penalty shootouts in the last 12 months by keeping it tight and taking it to penalties," said Lee.

"We know we've got to be a team that are tough to beat."

The World Cup features two groups of six nations playing each other with the top two in each progressing to the semi-finals.

England's women's toughest test will be against Argentina, but the matches against sixth-ranked Germany and seventh-ranked China are likely to be key in determining which teams go through.

"We've had a lot of changes since the London Olympics," he said.

"We are an inexperienced group. I'm not sure we can be overly confident at the sharp end of the tournament. But the players surprise me every day in training," he added, admitting he is naturally pessimistic.

England, who are ranked fourth in the world, are in a tough pool with favourites Australia and fifth-ranked Belgium.