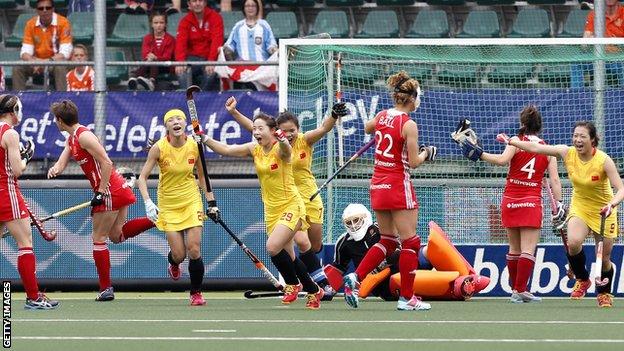 England women suffered a 3-0 defeat by China at the Hockey World Cup in the Netherlands.

Two goals from Yang Peng either side of a Meiyu Liang penalty corner inflicted a second successive defeat on Jason Lee's team.

China scored from all three of their shots on target, while England squandered their eight attempts.

England now face an uphill battle to finish in the top two of Group B to reach the semi-finals.

England effectively have to win their remaining three matches - two of which are against title holders Argentina and European champions Germany - to stand a chance of progressing in The Hague.

Lee said: "We are unmistakably on the edge of a precipice. In hockey terms, it doesn't get much worse than this."

England, ranked third in the world, paid the price for a lack of sharpness in front of goal against the seventh seeds.

The closest they came was when Lily Owsley's narrow-angle shot hit both posts in the first half.

After the interval, China twice scored against the run of play through Yang and Meiyu.

Having lost their opening match against the United States, coach Lee pulled goalkeeper Maddie Hinch for the final six minutes to add an extra outfield player but a loss of possession inside their own half allowed Yang to score her second with an angled reverse-stick shot.

"I'm just devastated. There are still a lot of games to go in the tournament but I think one thing we pride ourselves on is our fight and I think we've been lacking a bit of that," said captain Kate Richardson-Walsh.

"We are getting opportunities but we aren't taking them. I hold my hands up as it is me and everyone else in the team who are responsible.

"We need to be hard and honest with each other and come out for the rest of this tournament and play like an England team play."