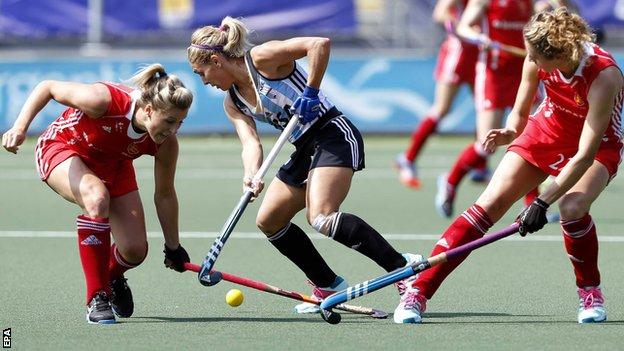 England's women suffered their fourth straight defeat of the World Cup as Argentina snatched a 2-1 win with the final play of the game.

Carla Rebecchi forced the ball home from a penalty corner taken after the final hooter had sounded.

England had taken a seventh-minute lead when Alex Danson scored following their only penalty corner.

Argentina equalised through Delfina Merino after 27 minutes and went on to dominate the second half.

Jason Lee's team enjoyed more possession in the first half, but were punished for not making their early superiority count.

Danson said the England players were "absolutely devastated" at the manner of their defeat.

She added: "It's been like living a nightmare but we will regroup and get better.

"It will probably be the toughest learning curve we'll ever have."

Argentina were without Luciana Aymar, widely regarded as the best player in the world, who was left out to rest a right hamstring injury.

England had already been eliminated from the competition, having lost 3-1 to the United States, 3-0 China and 4-1 to South Africa.

They play their final match of the competition against Germany on Tuesday.