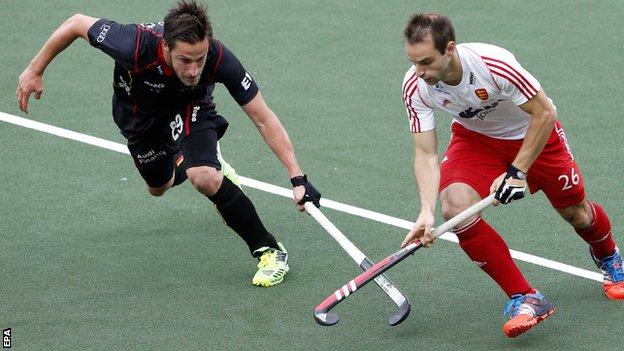 England's men qualified for the World Cup semi-finals with a dramatic 3-2 victory against Belgium in their must-win final Group A match.

Belgium, who knew a draw would see them progress at England's expense, led after 14 minutes through Thomas Briels.

Nick Catlin and Ashley Jackson scored in each half to put England ahead.

Victory ensured England finished as Group A runners-up with three wins from their five pool matches, with either the Netherlands or Argentina awaiting them in Friday's semi-final.

After suffering a 5-0 thrashing by champions Australia on Saturday, Bobby Crutchley's men showed resilience and determination to put that defeat behind them.

The Belgians, who were backed by a large vocal support in The Hague, enjoyed plenty of possession and dominated territory throughout.

But England defended stoutly and caused problems on the break, eventually being rewarded when Lewers kept his cool to secure victory four minutes before full-time.

"We have done it the hard way as usual but we deserve to be in the last four," said England's opening goalscorer Catlin.

"We broke on the counter-attack and deserved the win. But it was our defence that won the game."