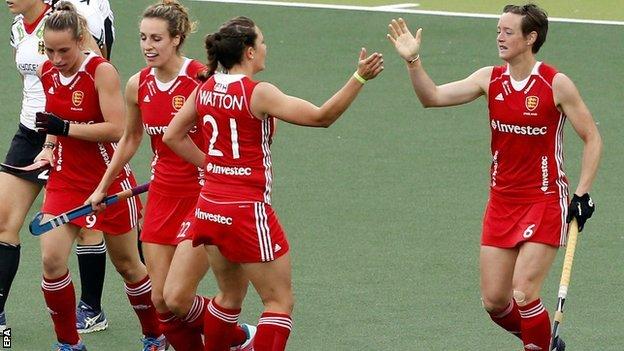 England's women ended the World Cup group stage with a 3-1 win against Germany - but it was not enough to stop them from finishing bottom of Pool B.

After a quiet start, the match came to life as all four goals were netted in the space of 11 second-half minutes.

Germany were given hope by Hannah Kruger's strike, but England held out for their first win of the tournament.

They now face Belgium in Thursday's 11th-place play-off as they aim to avoid finishing last in the 12-team event.

"We have got the win we have been looking for," said midfielder Gilbert. "We have been bitterly disappointed about the last 10 days but it is nice to finally get that win.

"Now we need to focus on the task ahead and take the game to Belgium, play with no fear going forward and defend diligently like we did against Germany."