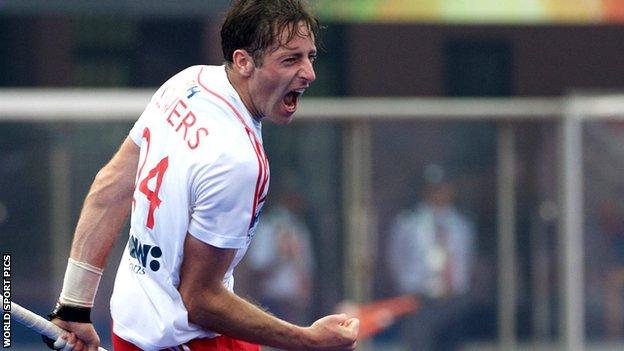 A brilliant strike from Iain Lewers earned England a 1-1 draw against Belgium and ensured they top Pool A at hockey's Champions Trophy in India.

England had only needed a draw to win the group but fell behind after nine minutes, and Lewers then missed a chance to level with a penalty stroke.

It was the final quarter when he made amends, firing home from long range.

England progress to Thursday's quarter-finals where they will face Germany, who finished bottom of Pool B.

After an opening victory over world number one side Australia and an 8-2 thrashing of Pakistan, England were in danger of letting all their good work in Bhubaneswar slip against Belgium.

Amaury Keusters found space in the circle to score with the reverse stick after nine minutes as the Belgians dominated the opening exchanges.

England had a golden chance to level through a penalty stroke with seconds remaining in the half, but after a lengthy delay for a video referral, Lewers could only hit the bar.

The third quarter saw a succession of penalty corners as England pressed hard for the equaliser, but they were almost caught on the break as Keusters rattled the bar in a rare Belgian attack.

The breakthrough finally came when Lewers made space on the edge of the circle and cracked a fierce reverse-stick strike into the bottom corner to equalise, and England survived a couple of nervous moments as the clock ran down.

"It was nice to make up for the [penalty] miss and contribute to the team," said Belfast-born Lewers.

"It happens sometimes but fortunately it didn't have too many consequences. We started to regroup after half-time and we maybe shaded it in the final quarter."