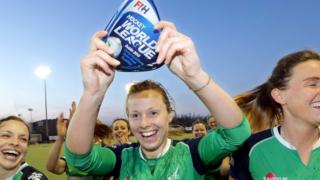 Ireland's women stay on course for a place at the Rio Olympics as they win the World League 2 tournament in Dublin.

The Irish beat Canada 4-3 in a shoot-out in the final after the game had finished 1-1 at Belfield.

Captain Megan Frazer said the players's nerves were "left a bit shaky" by Sunday's contest but that they will go into the final Olympic qualifier in Valencia next June "believing we can do a bit of damage there".

The Irish women will need a top-three finish in Valencia to be guaranteed a Rio spot while a top-five finish could conceivably also prove enough.