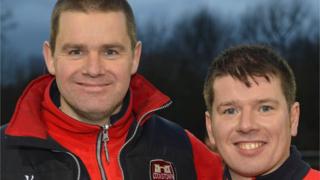 The Brazil men's hockey team arrived in Northern Ireland at the beginning of the month in a bid to help improve their world ranking in time for the Rio 2016 Olympic Games.

The Brazilians took on Cookstown Hockey Club at Steelweld Park in Cookstown, but lost to the hosts 5-2.

Brazil's coach and Cookstown's co-coaches were on hand to assess their nation's chances of qualifying.