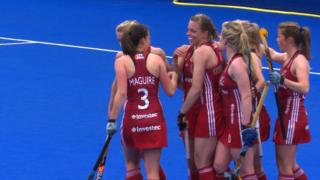 A brace from Alex Danson helps Great Britain to victory over Japan, on their first return to the Olympic Park since London 2012.

The Cherry Blossoms took a first-half lead through Yukari Yamamoto before GB retaliated in the second half.

The match was seen as an important warm-up before the Olympic qualifying event in June, when GB will travel to Spain to play in the World League for a place at the Rio 2016 Games.