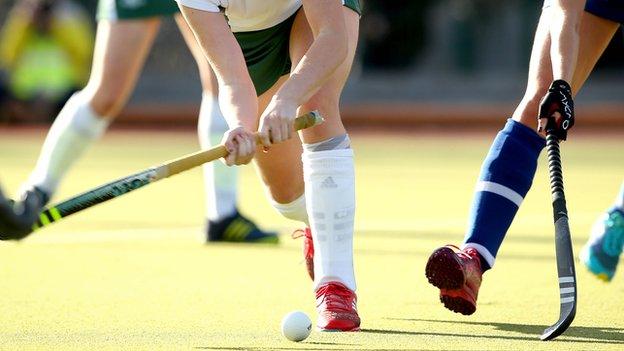 Pegasus will be the only Ulster team in Sunday's Irish Senior Cup finals after defeating Belfast Harlequins 1-0 in the semi-final at Deramore on Saturday.

They will meet the holders UCD, who beat Leinster rivals Loreto on penalties following a 0-0 draw.

Banbridge kept alive their hopes of a place in the Irish Hockey League play-offs with a 2-1 win over Railway Union.

However, Cookstown remain in relegation trouble after a 3-2 away loss to Monkstown.

But had it not been for some heroics by Quins' keeper Helen Stevenson, the margin could have been more emphatic.

In the men's semi-final at Comber Road, Lisnagarvey made a bad start when they conceded goals to Pembroke's Stephen Sweetnam and Ronan Flannery in the opening 10 minutes.

The Hillsborough side, despite dominating possession, were left with too much to do after Irish international Alan Sothern made it 3-0 from the penalty spot in the 39th minute.

In the Irish Hockey League, Banbridge remain four points adrift of the fourth and final play-off place despite beating bottom side Railway Union at Havelock Park.

Johnny McKee scored twice in the first half, one from a penalty corner and the other after an Owen Magee assist as Bann moved into a 2-0 interval lead.

Railway pulled a goal back with four minutes left when Kenny Carroll flicked the ball home but the home team held on.

Cookstown remain in the relegation play-off position and seven points from safety after their loss to Monkstown.

The Ulster side took an early lead through Scott McCabe but Monkstown led 3-1 at half-time following goals from Guy Sarrat (2) and Andrew Ward before Stuart Smyth's late reply.