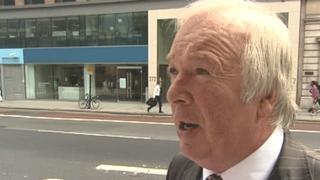 Jumps trainer Howard Johnson, who is facing a disciplinary hearing over horse welfare, insists he has done nothing wrong and will "defend his name to his dying day".

Johnson is charged with running the horse, Striking Article, eight times after it had a palmar neurectomy, which involves the severing or removal of leg nerves running to the foot.

But the trainer says he did not know this procedure was illegal and he thinks the rule is wrong.