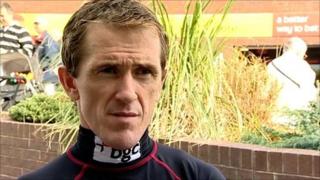 Jockey Tony McCoy says he supports the changes to the rules regarding the use of whips bought in by the British Horseracing Authority (BHA).

The champion jockey believes they're for "the good of horse racing" and thinks it will help that the BHA have been so prescriptive about the use of the whip.

The new rules come in on 10 October but despite his approval the BBC Sports personality of the year says the whip cannot be banned as it wouldn't be possible to race horses without one.