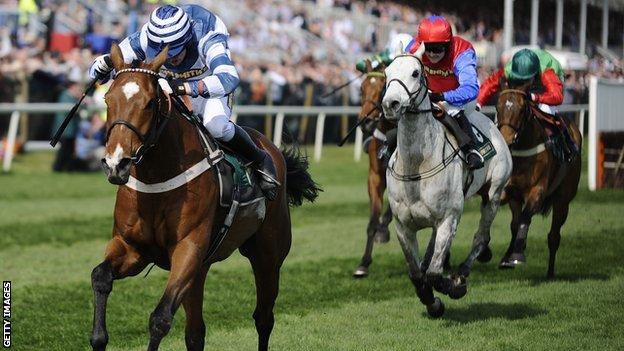 Dai Walters wants to beat the owners and trainers challenging his Oscar Whisky in the Welsh Champion Hurdle, just as long as they have a good time.

Walters said: "We like to look after owners and always give them a drink."

"I treat people like I'd like to be treated at other tracks. Give them a drink and a sandwich. It's our Welsh way."

"To be honest, whatever you run in that there's no hope of beating Oscar Whisky," said Pembrokeshire handler Curtis, whose seven-year-old The Jigsaw Man is a long shot.

"But there were so few entries and it's nice to support the local track.

The Ffos Las meeting is subject to a Saturday morning inspection on the track, which has been covered with protective sheets all week.

Clerk of the course Tim Long said: "The temperature is forecast to get above freezing at dawn so the covers will come off then.

"There's crispness in the ground today [Friday] and frankly we could have done without the temperature having fallen to minus five degrees last night, which was colder than forecast."

But trainer Henderson and owner Walters hope the meeting is on to test Oscar Whisky as they prepare for the World Hurdle at this year's Cheltenham Festival.

Since falling at the final flight on his seasonal return at Ascot, he has won twice at Cheltenham and now goes for back-to-back victories at Ffos Las.

"I've never had a bet on Oscar in my life," Walters continued.

"You'll never get a price on him anyway

"He was very unfortunate when he fell at Ascot, but he has done well in his last two races and has a really good turn of foot."

Vale of Glamorgan trainer Vaughan is not expecting Ski Sunday to worry the hot favourite on his first start over hurdles this season.

"Oscar Whisky is going to be impossible to beat on all known form," said Vaughan.

"But there is some decent prize-money on offer and we'll have a go and see what happens.

"Ski Sunday shown good form over hurdles in the past and obviously, we want to support this race and support the track, so we thought we'd let Ski Sunday take his chance."