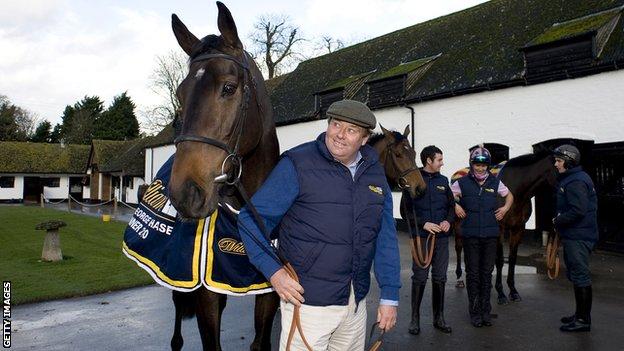 Saturday's meeting hosts the richest hurdle race in Europe and has attracted top trainers, while the card also features the Grade One Denman Chase.

Paul Nicholls and Alan King all having entrants in the Chase in which Nicky Henderson's Long Run will also appear.

"Long Run is going to have a tough race," Higgins told BBC Berkshire.

Higgins is hopeful the meeting will beat the weather, after Thursday's inspection showed that the course was perfectly raceable at present.

But snow is forecast on Thursday night with temperatures also due to dip on Friday night.

Clerk of the course Richard Osgood added: "The only recent change in the forecast to that of which we've been seeing all week is that we are supposed to get some snow this evening [Thursday].

"I'm not sure how much we'll get. It won't be too cold though, zero or 1C. It could be fairly cold on Friday night, that is a possibility, we'll just have to see."

If it does go ahead, Higgins says he is excited by Saturday's meeting, which should also provide some pointers for the Gold Cup defence of Long Run.

"I think Nicholls is planning to run three horses in the Chase; What a Friend, Tidal Bay and Aiteenthirtythree," added Higgins.

"I know King is keen to run Medermit, and I also think Henderson will run a horse called Burton Port that finished second in the 2010 Hennessy Gold Cup here, and I believe he is looking very well.

"So if Long Run was to win, then it would be a good step forward on his way to Cheltenham."

The meeting will host the re-scheduled Scilly Isles Chase, which fell victim to the weather at Sandown last weekend

That means Ruby Walsh will now be able to ride Nicholls-trained Triumph Hurdle winner Zarkandar in Saturday's Handicap Hurdle after he was allowed to defer his suspension.

Walsh had lost his appeal against a three-day ban, incurred for careless riding at Cheltenham on 28 January.

As there was originally no Grade One race on the card, Walsh was set to be on the sidelines for Saturday's event.

But BHA rules state that Walsh can defer his ban on days where Grade One races are run.

Also on the card, top novices Sprinter Sacre and Cue Card are set to clash in the Game Spirit Chase.

Respective trainers Henderson and Colin Tizzard have both been bullish about their chances, and the race should provide some clues for The Arkle at next month's Cheltenham festival.