Although others are perhaps more associated with Aintree than Josh Gifford, it was at the famous Merseyside racecourse where he enjoyed his finest days.

And not just because of the emotional Grand National success of Aldaniti and Bob Champion.

Prior to taking up training in 1970, jump racing's four-time champion jockey was particularly effective around the iconic Aintree obstacles.

In thirty attempts at races staged over Becher's Brook, The Chair and Canal Turn, Gifford failed to complete the fearsome course on only four occasions.

He never won the Grand National as a jockey but was famously second, behind 100-1 shot Foinavon in 1967, on well-backed favourite Honey End. 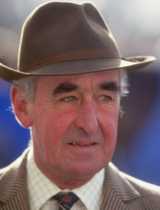 He was the most colourful of characters, much-loved and admired throughout racing, and about whom I have never heard a bad word

Honey End, trained by the controversial Captain Ryan Price, with whom Gifford had a famous association, had been caught up in mass chaos at the 23rd fence, where many of the runners crashed out.

But when Foinavon, who'd been so far behind that he avoided the melee, galloped by, Honey End soon set off in pursuit, and for a time looked likely to reel in the leader, until his reserves of stamina drained.

However strong the disappointment, Gifford is sure to have joined the winning jockey, Johnny Buckingham, in celebrating, probably with a wild night in nearby Southport.

In an era quite different to today's, a more cavalier attitude emanated from the jockeys' changing room, and regular late-night partying was commonplace.

Indeed in 1993, when Gifford became the only person to win Cheltenham's now Paddy Power Gold Cup as a jockey (Charlie Worcester, 1967) and a trainer (Bradbury Star, 1993 & 94), I asked him to contrast the two successes.

With his trademark, ear-to-ear grin, he declared: "I can hardly remember Charlie Worcester because I was still p***** from the Champion Jockey's Ball the night before."

During his highly-successful riding career, good looks and an easy charm ensured Gifford was in demand both in and out of the saddle, on one occasion modelling with actress Diana Rigg.

In all, he won nearly 650 races, most famously the 1967 Schweppes Hurdle, still staged at Newbury this weekend but as the Betfair Hurdle, on Hill House.

The horse failed a post-race dope-test, and a long-running Jockey Club inquiry followed, but no malpractice was found.

Nothing did more for Gifford's profile than the win in the Grand National of 1981.

It would be hard to dream up the truly extraordinary story of how Bob Champion overcame cancer, and Aldaniti was nursed back from injury, for a fairytale success.

It was the stuff of Hollywood, and, in the 1983 movie Champions, Edward Woodward, portrayed Gifford's sense of unswerving loyalty towards his jockey, as the critics circled.

He was a great jockey, a great trainer & a great man...so loyal to his jockeys

Though Aldaniti was the best-known horse painstakingly-prepared at the training stables at Findon, on the edge of the Sussex Downs, there was a long list of other top-notch performers.

Amongst them were quality chasers Door Latch, Bradbury Star and Deep Sensation and crack hurdler Kybo.

In 2003, after more than thirty years, Gifford handed over the training licence to his son Nick, assisted by his sister, the Olympic three-day eventer, Tina Cook.

Retirement gave him more time to indulge a passion for cricket, both watching and playing. His greatest moment came when bowling Brian Lara for a duck in a charity match at Hove.

Josh Gifford's passing is much more than the loss of a champion jockey and Grand National-winning racehorse trainer.

He was the most colourful of characters, much-loved and admired throughout racing, and about whom I'm sure that, literally, I have never heard a bad word.