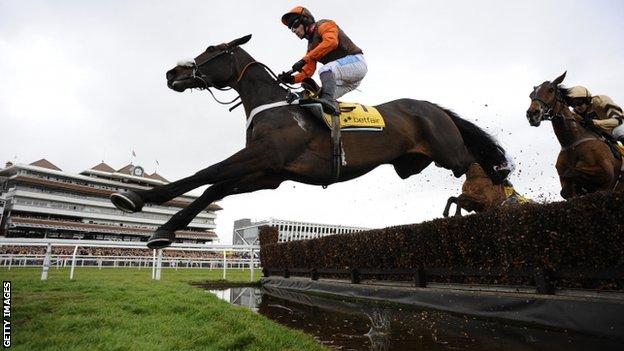 Long Run prepared for his defence of the Cheltenham Gold Cup next month with victory in the Denman Chase at Newbury.

Trainer Nicky Henderson's seven-year-old, ridden by Sam Waley-Cohen, was pushed to the finish by Burton Port, with What a Friend coming home third.

"He felt like different horse. He was more up for it. We learned how to set him up for a fence when you get him going quicker."

Long Run started as the 4-7 favourite and played a patient game as The Giant Bolster led the running for much of the race.

Henderson's top chaser then hit the front and seemed set to pull away after jumping the final fence, but stablemate Burton Port's late surge meant the Gold Cup favourite's margin of victory was only half a length.

Waley-Cohen added: "I was really pleased with his jumping. He was a little careless with the water [jump], but apart from that he's jumped really well. You couldn't ask for more from a seasoned chaser.

"That is exactly the confidence boost you want to go to the Gold Cup with."

The Cheltenham Festival runs from 13-16 March with the big race run on the final day.

Meanwhile, Ruby Walsh rode the 7-4 favourite Zarkandar to a thrilling win in the Betfair Hurdle, which like the Denman Chase was rescheduled after last Saturday's meeting was abandoned because of snow.

The 20-strong field were bunched together until the final few fences, before the pace increased with two to go.

Zarkandar, trained by Paul Nicholls, did not make his move until the final few strides when he found a small gap before claiming victory by a length and a quarter from Get Me Out Of Here and Raya Star.

Champion jockey Tony McCoy took a heavy fall at the second-last fence while well placed with Darlan, but the 2010 BBC Sports Personality of the Year winner walked away after receiving treatment on the course.