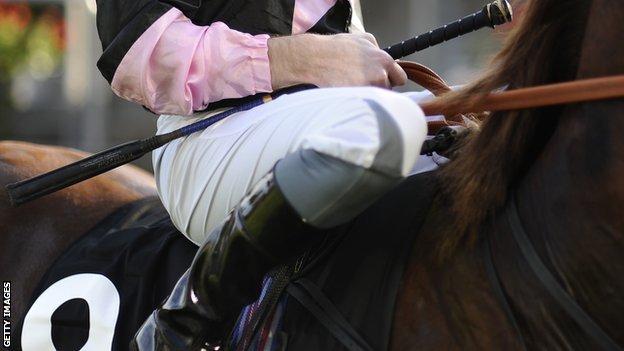 Changes to controversial whip rules for jockeys and a revised penalty structure have been approved by the British Horseracing Authority (BHA).

New rules, to be introduced in time for next month's Cheltenham Festival, will mean the relaxing of restrictions on the amount of times a whip can be used.

The authority will instead concentrate on the manner and frequency of use.

A revised penalty structure has been approved after jockeys said the .

Rather than it being an automatic breach when a rider uses the whip eight times on the Flat and nine times over jumps, the figures become the trigger point for the stewards to review the ride in question.

It has to be said that the jockeys have got a lot of what they wanted, particularly an instruction for more discretion/common sense from the stewards, and a dilution of penalties for minor infringements

Stewards will then consider how the rider has used the whip in the course of exceeding the allowed number before deciding whether a breach has occurred and a penalty is warranted.

New BHA chief executive Paul Bittar had indicated that he wanted the rules amended before the Festival.

"Over four months have passed since the introduction of the first set of rules following the Whip Review," said Bittar, after the changes were approved at a board meeting on Tuesday.

"Despite a number of changes to both the rule and the accompanying penalty structure, it is clear that while many objectives of the review are being met, and in particular those pertaining to horse welfare, a rule that polices the use of the whip based solely on a fixed number of strikes is fundamentally flawed.

"While well intentioned, and in accordance with initial requests from the jockeys for clarity and consistency via a fixed number, in practice the new rules have repeatedly thrown up examples of no consideration being given to the manner in which the whip is used as well as riders being awarded disproportionate penalties for the offence committed."

The whip rules have been a continuing problem since the BHA introduced strict new regulations and penalties just a few days before Flat racing's new Champions Day at Ascot last October.

French jockey Christophe Soumillon reacted with fury to receiving a ban and after being found to have hit Champion Stakes winner Cirrus Des Aigles six times in the final furlong at Ascot.

The initial review of the use of the whip, the product of lengthy and exhaustive research by the BHA, sought to replace uncertainty with clarity. The number of times jockeys could strike a horse was severely restricted. But if they could count, they would know immediately when they were in breach or not. It was black and white. Now it has all gone grey again.

The restrictions on strikes - eight on the Flat, nine over the jumps - still exist. But now they are no more than a guide for the stewards. Each offence is to be treated on its merits.

Further complexity surrounds the issue of financial penalty. In theory jockeys who abuse the whip can still lose their prize money. But that is likely to be amended and finessed, with fines reflecting seriousness of the breach. British horseracing is trying to provide punishments that fit the crime. It is an imprecise science. But it is now what jockeys say they want.

He said in a statement: "The PJA is pleased by the decision by the British Horseracing Authority to make important amendments to both the rules and the penalties relating to the use of the whip within racing.

"This change recognises that a 'grey' issue cannot be proportionately and fairly regulated by a 'black and white' rule, and that jockeys are skilled horsemen who care passionately about horses and are being denied the ability to use their full skill and judgement throughout the course of the race.

"If this is implemented as the PJA believes is the intention, jockeys will no longer be punished for genuine, wholly unintended mistakes nor for otherwise perfectly acceptable rides."

But welfare groups expressed their concern.

David Muir, the RSPCA's equine consultant, said the changes were "a black day for the horse racing industry."

"It is absolutely staggering that the BHA has taken such a backward step, less than six months after the whip rules were introduced to react to public concern," he added.

"The real losers are the horses - jockeys are once again allowed to use the whip excessively without a relatively strong preventative punitive element."

Roly Owers, the chief executive of World Horse Welfare, told BBC Sport on Tuesday: "There is abundant evidence that the new whip rules are working so it is bemusing that they have been changed yet again.

"Part of this success is through having a robust penalty structure that has achieved a real behaviour change among jockeys. Hence we are concerned that the penalties have been watered down for a third time, and also whether the even greater reliance on stewards' discretion will effectively work in practice. Time will tell."

Jockeys were unhappy with the former regime and were on the

"We are confident there is not a welfare problem associated with the use of the cushioned whip in British racing," said Bittar after the changes were announced.

"The objective of this proposal is to keep jockeys riding to a similar standard as they are now with regard to their significantly reduced use of the whip, but with added discretion and common sense applied by stewards when considering whether a rider is in breach of the rules."