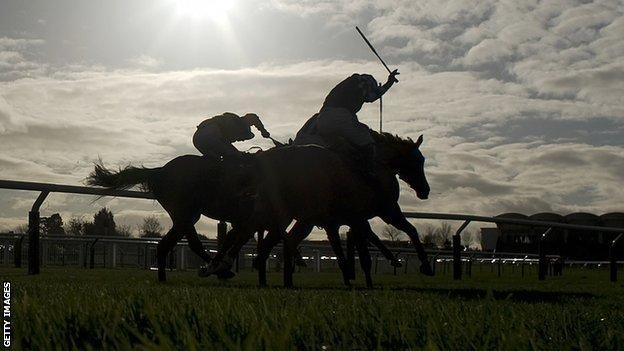 There is a real feeling that the sometimes bitter dispute over the rules governing jockeys and their whips is finally over, so who are the winners and losers?

Both the regulator, the British Horseracing Authority (BHA), and the Professional Jockeys' Association are, of course, insisting there is only one winner.

With the clock ticking away towards the showpiece Cheltenham Festival, when the eyes of the sporting and social world will be on the Cotswold track, they believe racing itself is the main beneficiary.

And they are correct to the extent that there is now much less chance of the big-race performances of Kauto Star and Hurricane Fly being overshadowed by headlines regarding whip excesses and bans.

It has to be said that the jockeys have got a lot of what they wanted, particularly an instruction for more discretion/common sense from the stewards, and a dilution of penalties for minor infringements.

Additionally, the much-loathed prize-money "fines" will at some point be reduced, though not scrapped altogether.

However, the riders are still being restricted to the eight-stroke limit over jumps, and seven on the Flat, which were at the core of all this when BHA officials sought to satisfy their critics last year.

The amended regulations, to be introduced in time for the Cheltenham Festival, will mean the relaxing of restrictions on the amount of times a whip can be used. The BHA will instead concentrate on the manner and frequency of whip use.

As for the BHA, clearly the fact this is a third set of amendments to the new rules since they were brought in is hardly a ringing endorsement for those that piloted them.

The diplomatic but firm words employed by Paul Bittar, the authority's chief executive of little more than a month - "well-intentioned... [but] ...fundamentally flawed" - rather ring in the ear.

For Bittar himself this has been little short of a triumph.

There were those who said we ghastly media reptiles were horribly unfair to be quizzing the Australian about the whip row even before his jet lag wore off in mid-January.

But the truth was the exact opposite: he had an issue with which to demonstrate his leadership skills straightaway, and with things working out well, his and the BHA's stock is rising.

That cannot have been said about the authority in ages.

In a BBC interview last week, Bittar referred to his dislike of "land grabs", ambitions by others, notably the Horsemen's Group of industry players (owners, trainers etc), to annex BHA responsibilities.

Efforts to see them off his "territory" may suddenly begin to get more straightforward.

And Bittar is not the only new boy called Paul to make his mark during the last frantic days of negotiations.

Paul Struthers, until just before Christmas a spokesman for the BHA, found himself in a position to take the less fashionable gamekeeper-turned-poacher route to become jockeys' leader.

For him and his members, an early favourable result augurs well for a bright future.

The RSPCA has condemned the changes, but to be fair to the BHA, with the limits still there, it's debatable if the welfare group is really correct to state "jockeys have effectively been given a licence to beat them [horses] with impunity".

Now, of course, everyone has got to make the amended whip rules work - but with practically everyone a winner here, the mood to make that happen is positive and upbeat.