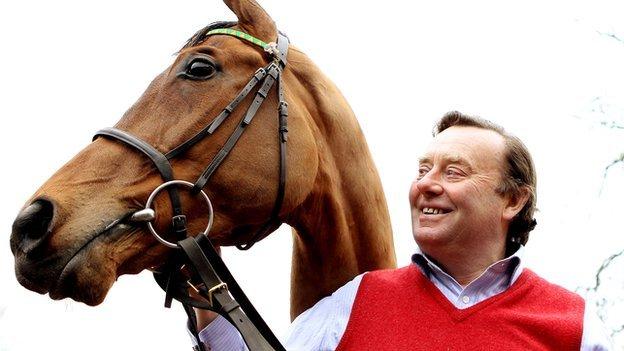 Historians are understandably concentrating on potential Cheltenham Festival fireworks by Kauto Star, but they should not discount Nicky Henderson.

The top trainer heads to the Cotswolds hoping to improve on a Festival CV already bulging with 39 winners, a total just one short of the all-time record, set by the legendary Fulke Walwyn between 1946 and 1986.

And, such is the horsepower at the disposal of Henderson, who won his first Gold Cup with Long Run in 2011, his stables at Seven Barrows in Lambourn are being dubbed '747 Barrows'.

"We are lucky to have races over four days to aim at nowadays," points out Henderson. "Fulke got to his total with only three-day Festivals, so that's a great number.

Sprinter Sacre is our one which everybody else has got to be frightened of, but with all the others I'm frightened of somebody else

"When I arrived in racing, he and Fred Winter were trainer Gods, and, of course, it's nice to try to emulate him, but it's winning the actual races that really matters most."

As well as Long Run, Henderson's Burton Port is Gold Cup-bound, and much fancied after returning from a long absence to run the champion mighty close at Newbury.

Elsewhere, names like Darlan, the brilliant Sprinter Sacre, ex-Champion Hurdler Binocular, Simonsig, Bobs Worth, Riverside Theatre and Oscar Whisky are amongst those best-touted.

The list rolls on and on, with hardly a race among the 28 staged between 13 March and 16 March without at least one Henderson representative.

"It's a team with strength in depth," said Henderson. "The novices are good, the older horses are good and there's a few little handicappers lurking in there that I hope will fit in.

"There are a lot of chances, but there's a lot of very hard horses to beat out there, and that's what frightens you.

"Sprinter Sacre is our one which everybody else has got to be frightened of but, with all the others, I'm frightened of somebody else."

All of which brings us neatly on to discussing Kauto Star, who looms large between Long Run, ridden by amateur jockey Sam Waley-Cohen, the owner's son, and another Gold Cup success.

In two meetings this season, epic races at Haydock and in the King George V1 Chase at Kempton on Boxing Day, the Paul Nicholls-trained Kauto Star, himself twice a Gold Cup winner, has come out on top.

"Kauto was going through a little patch last year, which led to people baying for his retirement," said Henderson. "I wish Paul had listened. He is obviously a better horse this year."

On Long Run, he added: "He is going to wear ear plugs to keep calm through the paddock and parade but they come off at the start, which will give him an adrenalin rush.

"What I liked about the Newbury win was the rhythm they got into, and, sure, you didn't have Kauto hammering that pace on, but they were very comfortable.

"At Cheltenham, all Sam wants to do is to get into a nice rhythm and have a nice time and, if he's enjoying it, the horse will enjoy it and so will I."

The countdown to the most important four days of the jump racing year is tense for the whole Henderson team, with the stakes high following the investment of so much time and money.

Eight times the leading or joint-leading Festival trainer, there is an admission to sleepless nights as to how to juggle the various options for his powerful string.

However, he insists that he is 'reasonably relaxed' this year, despite the inevitable expectations, particularly those associated with Sprinter Sacre, seen by many as the 'banker bet' of the meeting in the Arkle Chase.

"He's like a big, dark aeroplane, the most lovely horse," Henderson enthused.