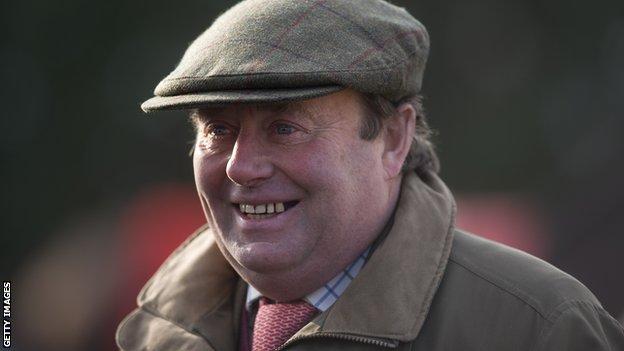 Trainer Nicky Henderson runs us through his runners for the Cheltenham Festival.

Darlan (Supreme Novices Hurdle): "He had a horrible fall at Newbury, but the next day you wouldn't have known anything had happened. To come out and do that as a five-year-old is really admirable."

Sprinter Sacre (Arkle Chase): "Some say he won't go up the hill, and Joe Tizzard [jockey of rival Cue Card] says he will go too fast for us. We don't need to say anything. I don't hang my hat on the times of races, but he has been unbelievably fast, and his jumping is such a weapon."

Binocular (Champion Hurdle): "He's not everyone's favourite, but I love him. He deserves more recognition, and is going there in very good shape. I liked what I saw when he won at Wincanton."

Simonsig (probably Neptune Novices Hurdle): "I can't believe he won't stay further than two miles because he won a point-to-point, but he has so much speed that you begin to wonder. He is hugely talented and he can pass anything on the gallops."

Bobs Worth (RSA Chase): 'He's doing all right now, and looks 10 times better than before his second at Ascot. The breathing op he'd had previously hit him hard. Take Grands Crus out, and it's very open, leave him in, and we may be fighting for second."

Riverside Theatre (Ryanair Chase): 'He is owned by the actor, Jimmy Nesbitt, who's had it written into his latest film contract to be free this day. He was really good at Ascot, and although some say he doesn't like Cheltenham, he's a much stronger horse than when beaten in the Arkle in 2010."

Oscar Whisky (World Hurdle): "He has a great chance of being there at the last to serve it up to Big Buck's and has a good a chance as anything of beating him. He has speed, and we'll see what his stamina is like."

Burton Port (Gold Cup): "That was a fantastic performance just behind Long Run at Newbury after a long break because of injury. The horse has really improved compared to two years ago when we considered him a good horse too."