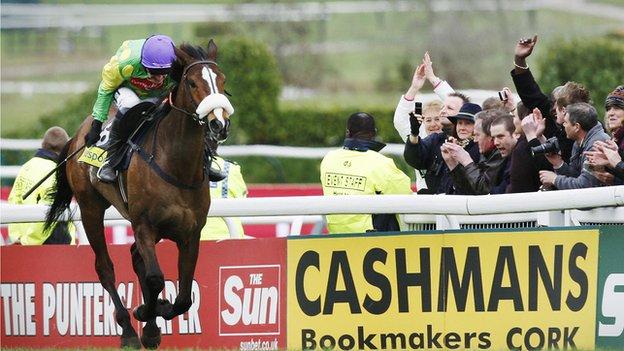 The 12-year-old is battling to be fit for the Cheltenham Festival, which begins on 13 March, after falling at the yard of trainer Paul Nicholls.

At the time of the fall, Nicholls said Kauto Star was only rated at "50-50" to compete in the race.

But earlier this week, he said in his Betfair column: "He had more of a buzz and a bit of the old swagger."

The champion trainer added that, on Saturday, Kauto Star had physio followed by an hour on the walker and was then sent out for a strong canter over 10 furlongs with What A Friend.

"When Clifford [Baker, head lad] pulled up and said 'big step forward', he didn't need to add anything," wrote Nicholls. "I could simply tell by the smile on his face.

"I cannot tell you how massively relieved I am to see Kauto progressing and going forward.

"Don't get me wrong, or carried away, because he is not there yet.

"Not at all, and things can change daily. But this was a step in the right direction and I'm much happier, I can tell you.

"We were going to give him Sunday off but I have decided to keep the momentum going and he will have another canter."

The Cheltenham Gold Cup on 16 March was expected to be a much-anticipated duel between Kauto Star and defending champion Long Run, only for to take Kauto Star took a "pretty awful fall" under jockey Ruby Walsh at Nicholls's Somerset yard last week.

"It would be a real blow to the Gold Cup - an enormous shame. Sports fans love to see the big characters back time and again, and there has been no larger figure in jump racing, probably ever, than 'Kauto'. And with the horse rejuvenated the 16 March clash with Long Run was hotly anticipated. I'm not optimistic, but you should never ever write off Kauto Star"

After the fall, Kauto Star's owner Clive Smith told BBC Radio 5 live: "I'm very, very concerned indeed. There is grave doubt whether we can make it. We're just hoping for the best that he makes a bit more of a recovery from this point in time.

"He will not run unless the best veterinary advice says he is up to taking part in such a serious race. There's no question the horse's welfare is paramount and we want the best future for him."

Nicholls also wrote on Thursday: "As a trainer, it is all too easy to sit on information when it comes to your horses.

"They have so many minor worries, niggles and setbacks - most of which turn out to be nothing of long-term importance - that you could be constantly updating on each of your string, to the press and the public, on a hourly, daily and weekly basis.

"But our policy at Ditcheat is always to be up front and honest about the well-being of our horses - such as the coughing scare last week - and especially so when it is a public, and once-in-a-lifetime horse, such as Kauto.

"In my opinion, the public have a right to know. In many ways, he is as much theirs, as Clive Smith's and ours."

Kauto Star looked to be in the twilight of his career earlier this season following the defeats by Long Run in the 2010 King George and the subsequent Gold Cup in March before pulling up at Punchestown in May.

But Nicholls's charge, who won the Cheltenham Gold Cup in 2007 and 2009, hit back to beat younger rival Long Run in the prestigious Betfair Chase at Haydock in November.

And he created history when he again defeated Long Run to land a fifth King George VI Chase victory at Kempton Park on Boxing Day to set up the Cheltenham showdown.