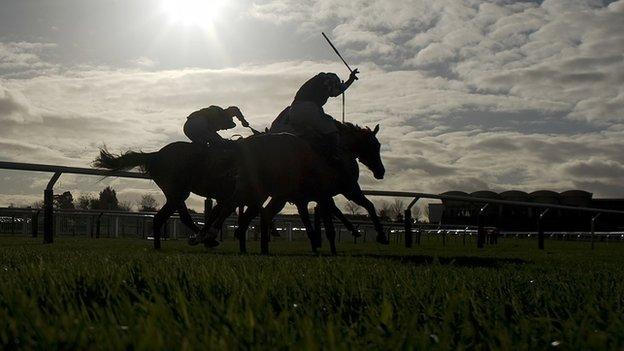 Race stewards will be allowed to use their discretion when new whip rules for jockeys are introduced on Tuesday.

In the more valuable races, riders who breach the guidelines could potentially be fined between £200 and £10,000.

The trigger for stewards to review a rider's use of the whip remains eight times or more for Flat races and nine times or more over jumps.

But, rather than automatically meaning a breach and suspension, stewards will decide whether to hold an inquiry.

The changes are being brought in by the British Horseracing Authority (BHA) just seven days before the beginning of the Cheltenham Festival, the four-day centrepiece of the National Hunt calendar.

It is the third time that new rules designed to counter concerns about horses' welfare have been changed after jockeys argued the regulations were too harsh.

"The focus over the coming weeks should be on Cheltenham and Aintree," said BHA chief executive Paul Bittar, "the climax to what has been a fantastic jumps season and then on the start of what promises to be another vintage year for Flat racing."

"This is the third amendment and has been welcomed by the jockeys. Some punishments of those who are found guilty have been diluted, but heavy fines are also available in the most valuable races to discourage a win-at-all costs attitude."

When deciding whether to hold an inquiry, stewards must consider the rider's use of the whip during the course of an entire race.

They will particularly focus on the closing stages of a race and relevant factors such as such as the manner in which the whip was used, including the purpose and degree of force.

Stewards may choose to disregard occasions when the whip was used, for instance, to keep a horse in contention, maintain focus and concentration, and to correct a horse that is noticeably hanging.

Under the revised penalties, a rider found to have used his whip once over the permitted level will be suspended for two days, while two times over will incur a four-day ban and three times over a seven-day suspension, with each extra usage adding two days to the penalty.

Fines can be imposed in jump races worth £20,000 or more and Flat races worth £27,500 or more, and repeat offenders will be referred to the BHA's disciplinary panel.

Jamie Stier, the BHA's director of raceday regulation and operations, who will be working with the jockeys, said: "The revised rules give jockeys the opportunity to use the whip sensibly, and the stewards now have discretion when reviewing a rider's use of the whip.

"Their focus will rightly be on the manner in which the whip is used. I have confidence in both the jockeys and stewards to apply their judgement judiciously in this matter.

"It is important that riders do not misinterpret the ability of stewards to exercise discretion as a reason to use their whip more than they do at present."

"Hopefully this can now be the start of everyone's focus being on the sport itself, as opposed to the regulation of it," he said.