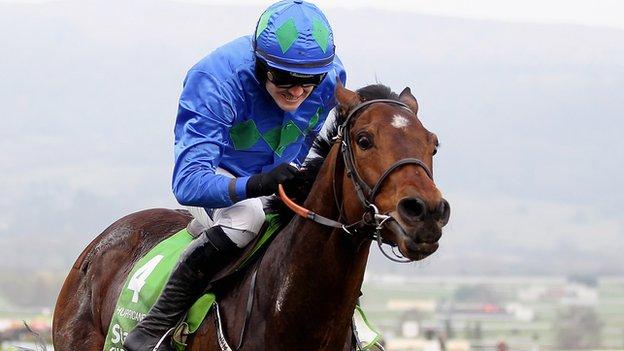 More than 230,000 spectators are expected at the meeting, which culminates with the Gold Cup on Friday.

Ruby Walsh, who is favourite to be top jockey at the Festival, rides Hurricane Fly for Irish trainer Willie Mullins.

Walsh will also be on board two-time Gold Cup winner Kauto Star after the horse won a to face 2011 winner Long Run in Friday's big race.

The fixture is the centrepiece of the jump racing season and will start to a huge roar from the crowd as the field sets off for the opening Supreme Novices' Hurdle (1330).

Darlan, who was travelling well for champion jockey Tony McCoy when falling in last month's Betfair Hurdle at Newbury - won by Zarkandar - is among the favourites for the first race.

He could mark a triumphant start for trainer Nicky Henderson, who is aiming to beat the record for winners trained at the Festival and saddles hot favourite Sprinter Sacre in the following Arkle Chase (1405).

Henderson has 39 career victories at the Festival, one short of the all-time record held by Fulke Walwyn.

Zarkandar, winner of the Triumph Hurdle at the 2011 meeting, will bid to give champion trainer Paul Nicholls a first Champion Hurdle victory.

"While there'll be overcast skies for the first day of Cheltenham, the forecast is for very settled weather. It'll be dry with light easterly winds and a top temperature of 10 degrees" - Simon King, Radio 5 live

Official going: Good, good to soft in places, on the hurdles and chase courses, and good to firm on the cross country

Nicholls has four of the 10 horses in the field, with 2009 runner-up Celestial Halo, Rock On Ruby and Brampour also lining up.

Kalann, Oscars Well and Overturn are other contenders, alongside the Mullins-trained Zaidpour.

Hurricane Fly has run once this season, winning the Irish Champion Hurdle at Leopardstown in January.

He has won his last seven starts, all of them Grade One races, and victory at Cheltenham would make him the first horse to successfully defend the Champion Hurdle crown since Hardy Eustace in 2005.

"He's a very special horse - we've known that since the beginning," Mullins told the Racing Post.

"His work and his schooling has been very good and we're all looking forward to seeing him attempt to defend his crown."

Mullins will hope for more success when three-time mares' hurdle winner Quevega seeks her fourth win in the race (1640).

Hold On Julio is unbeaten over fences and will bid to give trainer Alan King another reason to celebrate in the JLT Specialty Chase (1440), which he won with Bensalem in 2011.

Four previous winners of the Cross-Country Chase - Sizing Australia, A New Story, Gard Champetre (twice) and Heads Onthe Ground - are set to look for a repeat.

Hunt Ball, who has won six times this season, rising in the process from an official rating of 68 to 142, heads the weights for the concluding novices' chase (1715).

Pinstickers' guide: Hurricane Fly sets the standard after last year's win, but Zarkandar could be on the upgrade and can follow up his 2011 Triumph Hurdle victory at Cheltenham.