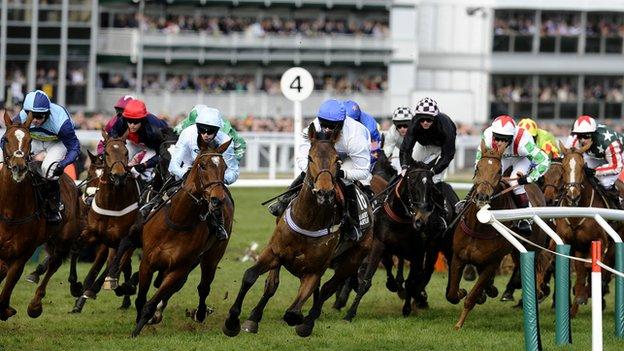 You may not know this, but there are three Olympics taking place in Britain this year.

Galloping alongside London 2012 and the Paralympics, Cheltenham hosts what has become known as the 'Olympics of horse racing' for four days, this and every March.

With its 27 races - 28 if you include a charity race - and multi-million pound prize fund, the Festival has become the most significant event of the racing year.

Of course, Aintree, with the Grand National, the Derby at Epsom, Royal Ascot and Glorious Goodwood are all hugely important, but not perhaps in the same way as Cheltenham - not least because the 109-year-old National Hunt Meeting, to give it its formal title, crowns true champions almost as a matter of course.

For four days a normally sedate corner of the Cotswolds will rock to a genuine festival: no-holds-barred action on the one hand, and a real party atmosphere on the other

It has seen some of the sport's legendary names, such as Kauto Star, Denman, Best Mate, Istabraq, Desert Orchid, Arkle and Golden Miller.

Some, in fact, claim things are overly focused on Cheltenham, but the fact is that even after victory in the smallest summer race at Newton Abbot or Hexham, owners are heard to inquire of their trainers: 'Might he make Cheltenham?'

Around 500 horses do make it, watched at the track by more than 220,000 people - a significant proportion on an annual pilgrimage from Ireland - with millions more following on radio and television.

It's estimated that a staggering £600m is bet, so, regardless of anything else, the results have a major say in bookmakers' profits and, subsequently, the funding of racing.

In terms of horses, Walsh, whose tally of seven successes at the 2009 meeting is a record, enjoys the best of both worlds, working for both Britain's champion trainer, Paul Nicholls, and Irish counterpart Willie Mullins.

Inevitable choruses of the Kaiser Chiefs hit 'Ruby' around the winner's circle tend to consist of a raucous variety of accents as Walsh's fans come together to celebrate their hero's success.

Even as you read this, throats are being cleared, with hopes high that the Festival's foremost modern-day player will be involved at the business end of most races this year.

That very much includes the 'Big Four': Tuesday's Champion Hurdle; the Queen Mother Champion Chase on day two; Thursday's feature, the World Hurdle; and the Gold Cup, climax of the fixture on day four.

Kauto Star has the eyes of sport, as well as racing, on him as he goes for an extraordinary third Gold Cup in his sixth assault on the sport's most prestigious prize.

The horse's 2011 conqueror, Long Run - twice behind a rejuvenated Kauto this season - seems to be the principal obstacle between the 12-year-old and a place as a true great.

Meanwhile, Walsh's mount, Hurricane Fly, is the hot favourite to retain the champion hurdler's title. The same goes for Big Buck's, who goes for an unprecedented fourth successive long-distance hurdling crown in the World Hurdle.

In the Queen Mother Champion Chase, Walsh partners Kauto Star's little brother Kauto Stone, who's yet to prove he's entirely a chip off the old block.

Heading the racing celebrity list are Walsh, champion jockey AP McCoy, Nicholls, Mullins and a trainer who has the strongest of squads, including Arkle Chase hotpot Sprinter Sacre on Tuesday, as he seeks a record-equalling 40th Festival win.

They'll be joined by A-listers more at home in style magazines and gossip columns.

Zara Phillips and husband Mike Tindall are sure to be there - Tindall has a runner, Monbeg Dude, on day two - as is actor James Nesbitt, part-owner of Riverside Theatre, a leading contender for the Ryanair Chase on Thursday.

For four days a normally sedate corner of the Cotswolds will rock to a genuine festival: no-holds-barred action on the one hand, and a real party atmosphere on the other.

Admittedly, comparisons with the Olympic ideal may be a touch unrealistic, but Cheltenham Festival's alternative unofficial title, 'the greatest show on turf', is not far off the mark.