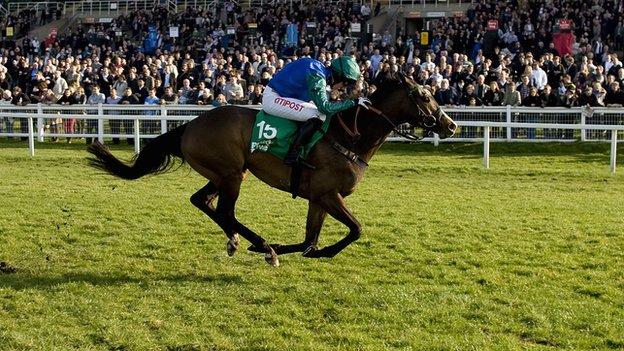 Paintball handed trainer Charlie Longsdon the biggest win of his career in the Imperial Cup in Saturday's feature race at Sandown.

Paintball, who underwent a breathing operation in December, sprinted clear to win by four and a half lengths.

The winner will earn a further £75,000 bonus from a sponsor if he wins a race at next week's Cheltenham Festival.

After creeping along in mid-division for jockey Noel Fehily, Paintball ran clear of long-time leader Nampour who finished second ahead of Sire De Grugy.

Longsdon said of his Irish-bred 20-1 shot: "He wasn't finishing off his races this season so we gave him the breathing operation.

"We've had plenty of winners but we haven't had the big Saturday winners yet. This tops it off."

Longsdon is aiming to enter Paintball in the County Hurdle at Cheltenham.