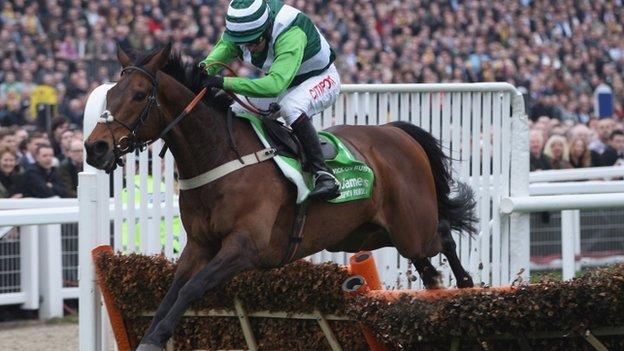 But the day was marred by the deaths of three horses - Scotsirish, Garde Champetre and Educated Evans.

Nicholls headed to Cheltenham quietly confident Rock On Ruby could spring a surprise against Hurricane Fly, who many onlookers thought - and expected - would retain his crown.

However, the hot favourite struggled to bridge the gap between Donald McCain's Overturn and Rock On Ruby, with the pair dominating the race from start to finish.

Hurricane Fly made a belated attempt to come out of the chasing pack and challenge the front-runners, but it was Nicholls' charge, impressively led by the wily Fehily, which stayed on best up the hill to secure victory.

Fehily said: "I went down and schooled him [Rock On Ruby] earlier in the week and he felt amazing.

"I was told not to worry about sending him on but I was worried going to the last as he was pulling up a little bit, but he picked up again afterwards.

"The ground probably suited him a little bit today, he was very well on the day."

Nicholls insisted the seven-year-old's win was testament to the efforts of his whole team.

"It's a really tremendous effort and everyone is going to be thrilled," he said. "This horse is the right age and it's brilliant.

"It was a great ride by Noel. He's a good man and has got a great winner. This is awesome."

About 55,000 punters passed through the turnstiles on day one and were in fine voice to deliver the famous Cheltenham Roar, which traditionally precedes the first race.

Victory gave trainer McCain success in the first Cheltenham Festival race since the death of his father Ginger, the trainer of Red Rum, last September.

Another interesting sub-plot in this week's build-up has been Nicky Henderson's bid to become the Festival's most successful trainer.

With 39 successes under his belt, he needed only two more winners to better the record 40 saddled by Fulke Walwyn between 1946 and 1986.

It took Henderson only until the second race to match the impressive tally as the effortless Sprinter Sacre, tipped to be racing's next superstar by many observers, romped to the Arkle Challenge Trophy by seven lengths.

But Binocular, ridden by Tony McCoy, finished fourth in the Champion Hurdle as Henderson was made to wait to surpass Walwyn's mark.

Long-time leader Fruity O'Rooney was outpaced by Alfie Sherrin in the home straight of the Specialty Handicap Chase.

And his jockey Jamie Moore was given a seven-day ban for excessive use of the whip to compound the misery of the runner-up's camp.

It was another Ruby Tuesday at the Cheltenham Festival - but not the one that many had expected. Jockey Ruby Walsh was many people's banker to land a second straight Champion Hurdle on hot favourite Hurricane Fly. Instead, Rock On Ruby landed the feature in stunning fashion.

Balthazar King won the Cross Country Handicap, but the success of Philip Hobbs' saddle was overshadowed by the death of pre-race favourite Scotsirish and fellow runner Garde Champetre.

Scotsirish picked up an injury jumping the Canal Turn fence, according to trainer Willie Mullins.

Mares' Hurdle favourite Quevega cruised to a four-length triumph in the penultimate race of the afternoon for Mullins.

Hunt Ball, who had risen from an official rating of 69 at the start of the season to 142 before Cheltenham, won the concluding Novices' Handicap Chase for trainer Keiran Burke, but Educated Evans was put down after fracturing a hind leg in a fall.