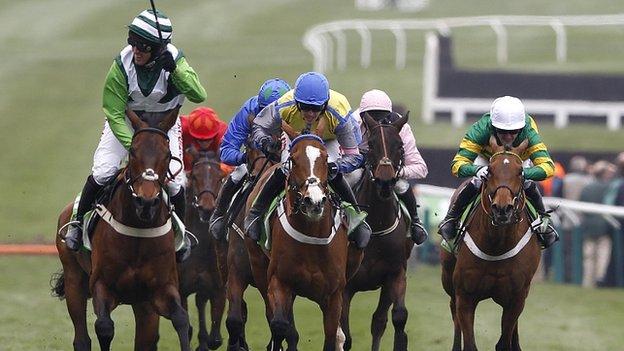 BIG RACE OF THE DAY

It was another Ruby Tuesday at the Cheltenham Festival - but not the one that many had expected.

On a day of contrasts, jockey Ruby Walsh went into opening day as many people's banker bet to land a second straight Champion Hurdle on odds-on favourite Hurricane Fly for trainer Willie Mullins.

But it was Rock On Ruby, for one of Walsh's other employers Paul Nicholls, who took the feature race to complete his trainer's collection of the four big Cheltenham championships.

Noel Fehily gave the 11-1 shot a positive ride and he ran out a clear winner, with Overturn second and 4-6 chance Hurricane Fly only third.

While Nicholls savoured winning the Champion Hurdle for the first time, he paid tribute to his team at a satellite operation 25 miles away from his main Somerset training base who look after the horse.

The Seaborough yard in Dorset, run by Richard Barber and assisted by Harry Fry, masterminded the victory.

"It's a big team thing. Harry worked for me as assistant before joining Richard full-time and everyone deserves praise," said Nicholls.

Fry, 25, said: "It's marvellous for Noel. Ruby was never going to get off Hurricane Fly and all our jockey plans fitted in well."

Fehily had been ruled out of the big Cheltenham meeting in 2010 and 2011 through injury and was claiming the biggest victory of his career at the age of 37.

"I have missed the last two Festivals, but this makes up for it," said the Irishman.

Champion trainer Nicholls' main Ditcheat yard has seen some horses struggling for full fitness in the lead-up to the Festival.

"We've had a little cough and we're not where we want to be at the moment, but Seaborough's horses have been flying and this horse looked so well beforehand," he said.

Nicholls was so happy with the horse's well-being he placed a bookmaker's £500 charity bet on him at 14-1 which means the Dorset and Somerset Air Ambulance is £7,500 better off.

While many might assume Rock On Ruby was named after Walsh, it is actually a reference to a ladies' clothes shop owned by Lynn Hunt, one of the Festival Goers syndicate which owns the horse.

HIGHLIGHT OF THE DAY

Sprinter Sacre helped make history for trainer Nicky Henderson in the Arkle Chase and it will take a long time before racegoers forget the effortless manner of his victory.

Jockey Barry Geraghty was confidently looking round at his rivals a long way out before sealing Henderson's 40th Festival win, which equals the training record held by Fulke Walwyn.

While Rock On Ruby won the big race, a new star emerged in Sprinter Sacre. This was a really hot race and he put it to bed after the fourth last. Henderson calls him the long dark aeroplane, and he flew home. It was a masterclass from a young horse who could shine for years to come.

"I have never before schooled a horse round to win a championship race at the Cheltenham Festival," said Geraghty after triumphing by seven lengths.

"And that's all it felt like, a schooling session. He has so much scope and power, and he absolutely loved it."

Henderson said he felt "humbled" to have matched Walwyn's mark and paid tribute to his winner.

"He has so much scope and size, but more than anything he's just a dreadful show-off," said the trainer.

Bookmakers were so impressed they made Sprinter Sacre the 6-4 favourite to win the Queen Mother Champion Chase at next year's Festival.

QUOTE OF THE DAY

"They say Mourinho is the Special One, but now I think we've found another," said Sprinter Sacre's jockey Barry Geraghty.

LOWLIGHT OF THE DAY

Scotsirish and Garde Champetre were put down after pulling up with leg injuries between fences in the Cross-Country Chase, while Educated Evans fractured a leg in a fall in the concluding novices' chase.

Cheltenham clerk of the course Simon Claisse said the incidents would be reviewed.

"Casualty rates are relatively low and sadly there is risk in sport at the highest level and occasionally things go wrong," he said.

Hunt Ball claimed a seventh victory of the season and capped a fairytale campaign when winning the concluding novices' chase.

The seven-year-old has effectively improved in the handicap weights by more than five stone over the last year, rising from an official rating of 69 to 142 before victory here.

Knott was fined £100 by racecourse stewards when he vaulted onto his horse behind Scholfield after a victory at Wincanton in January.

The Dorset farmer said: "I told you all along that he was in the wrong race - he could have taken the Gold Cup."

A publicity stunt backfired as bookmaker Paddy Power said it had to refund £2m to punters after pledging to pay back losing bets should Sprinter Sacre win the Arkle Chase.

DAY ONE IN NUMBERS

British-trained runners lead their Irish rivals by six victories to one going into day two.

Much of the focus will be on Grands Crus in the RSA Chase. The David Pipe-trained horse had been considered for a tilt at the Gold Cup on Friday before it was decided to stay in novice company.