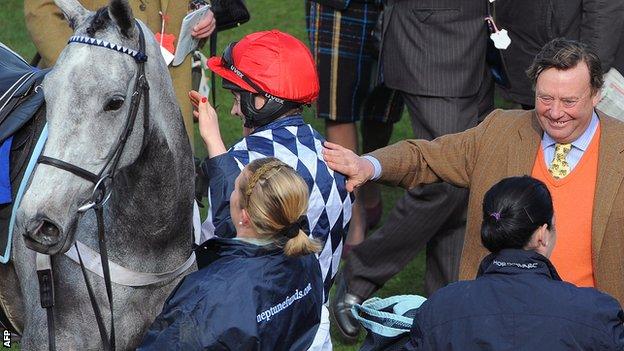 Nicky Henderson cemented his own proud place in the history of Cheltenham Racecourse nearly half a century after his father helped save the track.

The well-heeled trainer surpassed the record for Festival wins as he secured a remarkable four-timer on a dramatic day at the home of jump racing.

Many stables would be delighted to have one victory at the big meeting, let alone four in the same day, and yet Simonsig, Bobs Worth, Finian's Rainbow and Une Artiste triumphed at combined odds of 3,382-1.

It brought Henderson to 44 Cheltenham Festival winners, leaving the previous record of 40 held by Fulke Walwyn - which stood until this week - trailing.

"I've never had a day like this before. This is very special," said the 60-year-old Henderson, who trains at Seven Barrows in Lambourn, Berkshire.

"It doesn't happen without a lot of people doing an enormous amount of work. I only drive the ship, there's a huge team at home."

Cheltenham came near to closure 49 years ago following a takeover offer from a property developer, until Henderson's dad Johnny and friends outbid them with £240,000.

They went on to form the non-profit making Racecourse Holdings Trust which saved other endangered courses.

Nicky now has extra reasons to be thankful to his late father after whom the Grand Annual Chase at the Festival is named.

As he celebrated unprecedented success, the Old Etonian made a special point of thanking 68-year-old Albert "Corky" Browne, the head groom who has been at his side in nearly 34 years as a trainer.

Henderson passed the 40 mark when Simonsig won the Neptune Hurdle after joint leader Cotton Mill refused at the second last.

Another victory followed with Bobs Worth in the RSA Chase, known as the Gold Cup for novice horses.

Finian's Rainbow and rival Sizing Europe, the 2011 winner, were forced to gallop around the final fence after an earlier crashing fall into the rails.

As jockey Richard Johnson and a photographer were treated, part of the fence was sectioned off, but the leading riders were clearly confused and their mounts bumped into each other while swerving around the obstacle.

"It was a pity they did not have the fence there as it was a tremendous race between two great chasers," said Henderson.

Henderson's winning run at Cheltenham throws an interesting spanner into the trainers' title race, which he has won twice - but not since the 1980s - and rival Paul Nicholls has dominated for the last six seasons. The Nicholls monopoly looks seriously under threat and his favourite Big Buck's has to face Henderson's Oscar Whisky in the World Hurdle on Thursday. This is a championship battle that will go all the way to the finishing line at the end of next month.

Barry Geraghty, on Finian's Rainbow, seized the initiative up the hill to secure a treble on the day and his fourth win of the week.

"It's days like this you dream about when you're a kid with ponies, and when you're an adult too, come to that," said Geraghty.

Sizing Europe's jockey Andrew Lynch was left to rue what might have been as his mount was narrowly denied a third consecutive Festival success.

Trainer Henry de Bromhead said: "Andrew felt had he been able to jump the final fence it would have helped him.

"He had to make a more exaggerated move than Barry, absolutely. He had hugged the inner rail.

"We were eventually beaten fair and square, but things didn't fall as you would like them through the race."

Meanwhile the Henderson team, including the winner's owner Michael Buckley, revelled in the triumph.

"I wouldn't have any jumps horses if it was not for Nicky. We have been together since the early 1980s and I can't imagine doing it with anybody else," said Buckley.

"It is another notch in his long career and I am pleased and proud to be part of it."

As if to rub salt into his rival's wounds, Une Artiste won the Fred Winter Handicap Hurdle for Henderson at odds of 40-1.

It capped things off nicely for the man of the moment, who was assistant to Lambourn training legend Winter for four years in the 1970s before taking out his own licence.

Henderson has experienced controversy during his distinguished career.

He was found to have breached the rules after Moonlit Path, which he trains for the Queen, failed a drugs test. Henderson insisted he had not sought to boost performance.

That difficult period seems a lifetime away as the heady successes of Cheltenham 2012 are clocked up.

With five winners already on the board for the meeting, Henderson still has two days to reach new heights - including in Thursday's World Hurdle and the Gold Cup on Friday.

He has Oscar Whisky seeking to stop Big Buck's winning the feature race on Thursday for a record fourth time.

His team could hardly be in better form for those challenges.