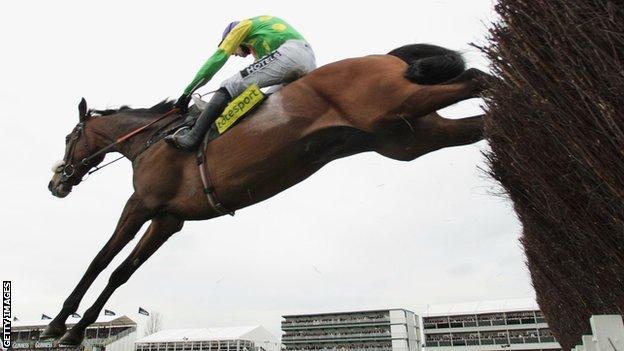 Trainer Paul Nicholls has told BBC Radio 5 live this "probably is" the horse's last appearance at the event.

The 12-year-old has recovered after being rated only "50-50" for the race following a fall during a schooling session three weeks ago.

Irish challenger Quel Esprit has been ruled out after he was discovered to be lame on Friday morning.

A sell-out crowd of more than 65,000 are expected at the Prestbury Park track for an eagerly awaited encounter.

Kauto Star has become an iconic figure in jump racing, winning over a variety of distances during his career and showing exceptional speed and stamina.

The French-bred gelding won a record fifth King George VI Chase at Kempton Park on Boxing Day and in 2009 became the only horse to regain the Gold Cup, having first triumphed two years earlier.

"We will see how he runs today," Somerset-based Nicholls told BBC Radio 5 live. "He has been in the form of his life this year and we do not usually retire them when they are in such good form.

"Whether he would run in another Gold Cup or not, I would say this probably is the last time.

"We will worry about the future after today. The most important thing is I am very proud he is there again for the sixth or seventh time competing at the top of his game."

The score between Kauto Star and Long Run, who is five years his junior, stands at two victories apiece when they have faced each other.

Kauto Star beat his younger rival in the Betfair Chase at Haydock in November and the King George the following month.

But just as his preparations were moving up a gear for Cheltenham, Nicholls said he took "a pretty awful fall".

Intensive physiotherapy and exercise have brought the horse back to fitness.

Owner Clive Smith admitted he was delighted just to see his horse in the field after his problems both last year and again recently.

"He ran a very tough race in the Gold Cup last year and you might have thought that's the best he can do now and therefore the future wasn't too great with Long Run winning so easily, but he's come back better than ever," Smith said.

"There'll be other horses making the pace, but it won't be too slow for Kauto. You have got to believe Kauto might start to do things on the final circuit and if he wants to go and isn't feeling his age, he'll maybe go on and control things until Long Run comes at him.

"You do get more relaxed. What I wanted was Kauto Star to win the races that mattered to make sure everyone knew how good he was, and remembered him in history for the great horse he is.

"I hoped that would be so and I think now everybody realises what a fantastic horse he is. We all hoped he would be one of the most fantastic horses around. We've got there, and this is a bonus, perhaps.

"Most people believe it would be the real fairytale ending to the Festival if he won the Gold Cup again. It would be a remarkable achievement - people say bring the house down, this certainly could bring the grandstand down. It would be fantastic so let's hope he can do it."

"Were Kauto Star to win I think it would go down as the biggest comeback in history. A lot of people will be nervous watching him. This horse has found renewed enthusiasm and he is what racing is all about, but I just feel that extra quarter of a mile will be Kauto Star's undoing."

Sam Waley-Cohen, on Long Run, is bidding to become the first amateur jockey to win the Gold Cup twice.

He runs for Nicky Henderson, who has passed the record for the most number of Cheltenham Festival winners this week and also saddles Burton Port.

"The score is 2-2 and this is the decider, so let's hope it's a great race," said Henderson.

"We're happy where we are and Paul Nicholls is happy where he is, and I'd have been genuinely sad if Kauto Star came there and wasn't at his best.

"There are lots of great races in the week, but I hope this is the highlight."

"He'd like rain, but you can't say he's got anything better than a sporting chance," said O'Neill, who won the Gold Cup as a rider on Dawn Run, and saddled Exotic Dancer to be second behind Kauto Star in 2007.

Ireland is represented by the Willie Mullins-trained The Midnight Club and China Rock for Mouse Morris.

What A Friend, who is part-owned by Manchester United manager Sir Alex Ferguson, finished fourth in the race last year for Nicholls, while Time For Rupert and Weird Al also boast some decent form.

Knockara Beau and The Giant Bolster complete the field.

Pinstickers' guide: Long Run may not have quite reached the heights of last season so far this term but has enough to triumph again while Synchronised could feature if the ground is not against him.