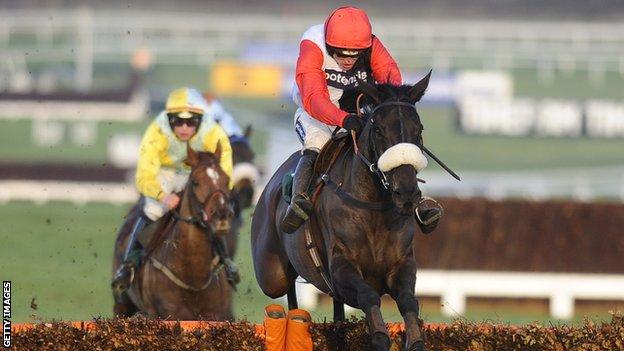 Big Buck's claimed a record-breaking fourth World Hurdle win at the Cheltenham Festival to equal the mark for consecutive victories over jumps.

The 8-11 favourite held off mare Voler La Vedette to put Paul Nicholls back in the trainers' championship lead.

The horse's triumph brought him level with Sir Ken's run of 16 successive hurdle wins set in the early 1950s.

Big Buck's was pushed all the way to the finish by 20-1 shot Voler La Vedette, who narrowly missed out on becoming just the third mare to win the World Hurdle.

Winning jockey Ruby Walsh exerted expert control over the hurdles before he called on his ride's trademark stamina to finish 1¾ lengths in front.

The win continued a streak that began on 1 January 2009 with the Unicoin Homes Handicap Hurdle and took Nicholls back to the top of the trainers' championship after he had been temporarily usurped by Henderson after his win in the earlier Ryanair Chase.

"We needed to ride him like that today as we've thought for a long time that to get the best out of him we need to make it a test," Nicholls said.

"He's an awesome horse, the tactics were executed to perfection and it was a great ride from Ruby."

In the first race of the day, Sir Des Champs surged ahead in the final straight to win the Jewson Novices' Chase.

"This is the first time he's had a real test this year as Gigginstown have had so many good novice chasers so we've kept him going out in the country in lesser races," trainer Willie Mullins said.

Jockey Denis O'Regan charged up the hill in the Pertemps Final to end his 66-race losing streak at Cheltenham.

The Irishman's horse, Cape Tribulation, blasted through from the midfield with three hurdles left to hold off the challenge of Catch Me.

The 14-1 outsider left Buena Vista in his wake as the 11-year-old failed to challenge for a win that would have been his third at the Festival.

The 7-2 favourite, who is co-owned by actor James Nesbitt, held off determined pursuers Albertas Run and Medermit for a win that lifted the punters in the grandstand to their feet.

Champion jockey Tony McCoy looked to have ridden Albertas Run to a third-consecutive victory in the event, but he fell short by half a length.

"They were always travelling a gear higher than he wanted to be in," said Henderson. "That was some ride [from jockey Barry Geraghty] to get him home."

In the Byrne Group Plate, 9-2 favourite Salut Flo lived up to his pre-race billing as he completed a dominant start-to-finish win.

Not even a stumble at the fourth to last could stop jockey Tom Scudamore from finishing six lengths ahead of The Cockney Mackem.

The 13-2 favourite stayed in the midfield before he broke free after the final fence and strode past 9-1 pacesetter Becauseicouldntsee to win by 4½ lengths.

In the final event of the day, Pascha Bere thundered into the lead in the final furlong to claim the St Patrick's Day Derby charity race.

The victory for Olympic eventer Tina Cook, riding in her first race, and her brother, trainer Nick Gifford, came just over a month after the death of their father, four-time champion jockey Josh Gifford.