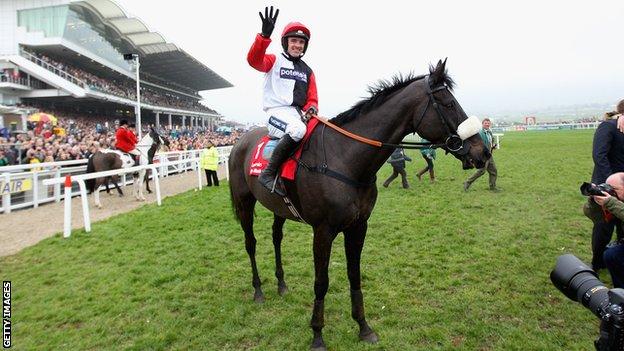 A record fourth World Hurdle win for Big Buck's and glory for actor James Nesbitt were among the highlights on day three of the Cheltenham Festival.

Two hours before Big Buck's claimed an unprecedented record fourth World Hurdle win at Cheltenham he was sound asleep in his box.

It had been suggested trainer Paul Nicholls's Somerset yard might be out out of form, but the horse was relaxed, and he had every right to be.

A gritty, brilliant victory under jockey Ruby Walsh equalled the mark of 16 straight victories over jumps set by Sir Ken in the 1950s.

Big Buck's has been unbeaten since he was switched from fences to hurdles more than three years ago. The decision to switch was made after he unseated rider Sam Thomas in the 2008 Hennessy Gold Cup.

The nine-year-old has dominated the staying hurdling division like no horse before him and always just seems to pull out enough to win.

Walsh shrugged off comparisons with undefeated Australian sprinter Black Caviar, who has won 19 races on the bounce.

"I'm not comparing him to Black Caviar for a minute, but running five or six furlongs on the flat is quite different from three miles over hurdles," said Walsh.

"Jumps horses have higher mileage, a greater injury rate and are harder to get fit. It's an incredible performance by Paul Nicholls to get him back here so many times."

Now the horse will go for a record 17th triumph, and fourth successive Liverpool Hurdle, at the Grand National meeting at Aintree in April.

Owner Andy Stewart said: "It's brilliant and the horse is such fun. They all went out there to try and get him beat and he just shrugs it off - tomorrow he'll be doing the Times crossword."

As he savoured a thrilling success, the Northern Irish star told of the enjoyment he got from being involved in horse racing.

"It's far too hard on itself this sport," the Cold Feet star said. "There were tens of are thousands of people here today from all walks of life enjoying it. Racing needs to embrace that rather than be so laden with worry."

The horse, named after the theatre in Nesbitt's hometown of Coleraine, gave trainer Nicky Henderson a record sixth win of the week and 45th in all.

Geraghty produced his mount to just deny Albertas Run, ridden by champion jockey Tony McCoy, a hat-trick of victories in the race.

"It was a glorious celebration of everything that is good about sport, not just racing. The courage the horse showed and the ride Barry gave him, plus the training performance - it's an incredible marriage," said Nesbitt.

"It's great to even have a bit of that pasted into the album of my memory. You can forget about an Oscar after that, Barry Geraghty deserves to win an Oscar."

Eventer Tina Cook won the concluding charity race on Pascha Bere, a horse trained by her brother Nick Gifford, just weeks after the death of their father Josh Gifford.

Josh died in February, aged 70, after a heart attack. He trained Aldaniti, the horse that Bob Champion guided to victory in the 1981 Grand National after recovering from cancer.

"Dad'll have been up in heaven, having a drink and cheering," said Nick.