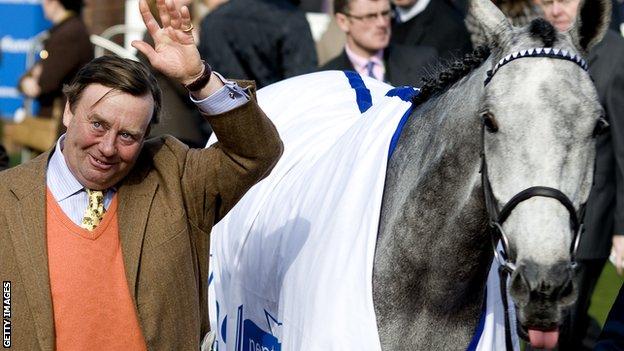 Trainer Nicky Henderson's success at the Cheltenham Festival has rubbed off on his staff as a stable lad won £1m on an accumulator bet based on five of the yard's six winners so far this week.

The bookmaker is believed to be Bet365 though a spokesman declined to comment.

"It's absolutely wonderful, he's such a lovely lad," said Henderson.

"I wish I'd known about it - I wouldn't have minded making a million quid."

Henderson has become the most successful trainer in Cheltenham history with 45 winners.

Actor James Nesbitt's Riverside Theatre completed Murphy's bet when it stormed to victory in the Ryanair Chase on Thursday.

"It was a horrible day for us as bookmakers, we lost on every single race," said Bet365's Pat Cooney. "While we are pleased for customers who had a good day, it is company policy not to discuss individual accounts."

Henderson, who trains at the Seven Barrows yard in Lambourn, secured a remarkable four winners on Wednesday to surpass the previous record of 40 overall winners held by Fulke Walwyn.

It is not the first time someone from Henderson's yard has been in the money - a stable lass there won £1m on the National Lottery in 2001.

Kathleen Young won the cash on Christmas Eve after reading a newspaper horoscope that said "cash winnings would add luxury to her life".

Murphy's £1m jackpot is the second major gamble to have been landed at the Festival this week with Phil Williams, owner of the Donald McCain-trained Son Of Flicka, reported to have collected £900,000 when his horse won the Coral Cup on Wednesday.