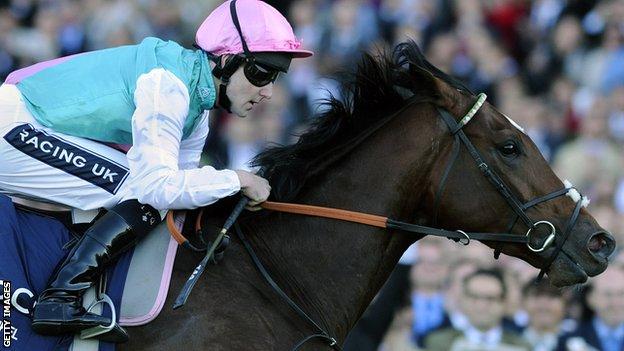 Rarely can there have been as much excitement around a sporting star at a campaign's start as that surrounding Frankel ahead of the Flat season.

The colt, guided by his trainer Henry Cecil to a brilliant nine wins from nine starts, is in Newbury's one-mile Lockinge Stakes on 19 May.

Mentally he's grown up. He could be a better horse this year than last year

Many believe that will be the start of a run towards confirming his place as an unrivalled, all-time great.

Certainly nothing came close to touching him in 2011, a year which included successes in the Sussex Stakes, Glorious Goodwood and on the new Champions Day at Ascot.

And the bad news for his opponents is that Cecil is sticking to his assertion that the Prince Khalid Abullah-owned horse may have actually improved for the 2012 season.

"As long as he keeps right, he could be a better horse this year than last year.

"We'll start off over a mile and we'll feel our way. Whether he runs at [Royal] Ascot over a mile or a mile and a quarter, time will tell. He'll tell us what to do; I'm not going to tell him."

In contrast to Frankel, who is out on his own as the star horse, the battle to be Flat racing's top jockey looks as wide open as it's been in years.

Both and Silvestre De Sousa, narrow loser in 2011, have won big jobs with the Maktoum family, for Sheikh Hamdan and the Godolphin stable respectively.

Those positions are thought likely to restrict the prolific nature of the pair, both of whom have moved south to Newmarket from their bases in Yorkshire.

Ex-champion Ryan Moore is also a big player when not required to be part of trainer Sir Michael Stoute's operation, while another former title holder, Kieren Fallon, is aiming for a seventh title despite reaching the age of 47.

The challenge of Richard Hughes, runner up to Hanagan in 2010, picked up during a forgettable winter riding in India.

Outside those five, both Joe Fanning and Luke Morris, the kings of the all-weather circuit, have the sort of hard-working, have-saddle-will-travel mentalities that could pay off.

That was the situation when Hanagan - a barely-considered 'no-hoper' - took the championship for the first time; to me, Luke Morris has a very similar profile and could be the surprise package. Stranger things have happened.

However, when it comes to Frankel, anything other than glory would be a shock.